Value of mergers and acquisitions in MENA reached $44.8bln in H1 2021 – Refinitiv 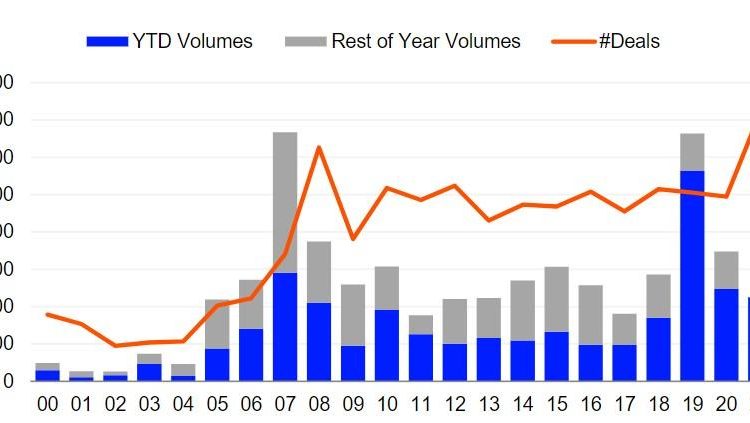 Mergers and acquisitions in which MENA has any stake reached $ 44.8 billion in the first half of 2021, a 9 percent decline in value over the same period last year, according to global data provider Refinitiv.

The MENA target for mergers and acquisitions fell 9 percent in the first half of 2021, with a total value of $ 35.8 billion.

A third of this value comes from the $ 12.4 billion deal by Saudi oil producer Aramco, which is selling 49 percent of its pipeline business to US-based EIG Global Energy Partners.

The UK was the target country for outbound M&A in MENA, followed by the United States.

Inbound M&A had its best start to the year on record with a transaction value of $ 21.7 billion and 157 deals, the highest value in the first half of the year in MENA.

Domestic mergers and acquisitions in the MENA region declined 34 percent compared to the same period last year, and totaled $ 14.1 billion so far this year.

Saudi Arabia was the most targeted country, with $ 14.2 billion in M&A activity and 40% of total M&A targets.

JP Morgan topped all MENA engagement and target M&A rankings in the first half of 2021, advising on transactions valued at $ 21.7 billion.

This article is for informational purposes only. The Content does not provide any tax, legal, or investment advice or opinion as to the suitability, value, or profitability of any particular security, portfolio, or investment strategy. Read our full disclaimer policy here.

Lawyering 2.0: How the pandemic has jetpacked legal tech

A New World for Mergers and Acquisitions

A Changing Landscape for Mergers and Acquisitions in Healthcare