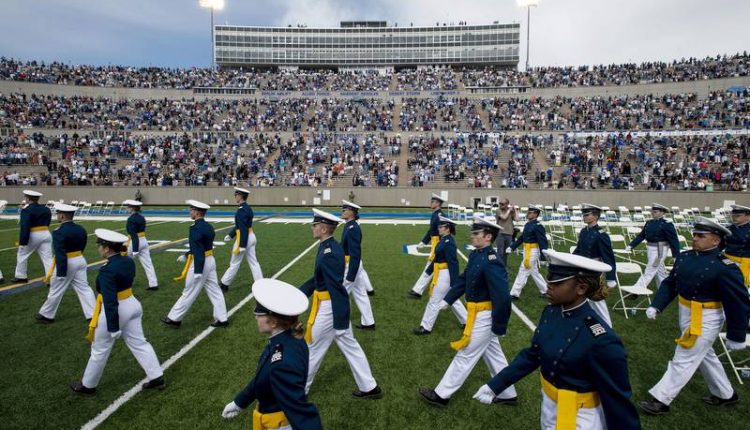 The airmen argued in court filings that their requests to be exempted from COVID vaccination on religious grounds were wrongfully denied.

The plaintiffs are represented by the First Liberty Institute in Texas and the Washington law firm Schaerr Jaffe. They filed a class-action complaint against Defense Secretary Lloyd Austin and Air Force Secretary Frank Kendall in US District Court for the Northern District of Texas on May 27.

The two officials are named in the complaint as the public faces of any military employee involved in doling out punishment for remaining unvaccinated without a waiver. The defendants have not yet responded in court.

“Plaintiffs have lost promotions that had already been announced, received official discipline, been barred from training opportunities and placed in a no-pay status,” the complaint said.

They are part of the minority of airmen and Space Force Guardians — about 3%, or 15,000 people — who have sought to avoid COVID vaccines for medical, religious or other personal reasons.

Two of the plaintiffs also tried to get medical exemptions, citing allergies, but were told their allergy tests were insufficient. In one case, the Air Force allegedly told Stef that the doctor he saw was “illegitimate” and produced fraudulent test results.

Because the vast majority of people are now vaccinated, and because inoculated people can still catch COVID-19, the plaintiffs say it’s unreasonable for the Pentagon to enforce its August 2021 vaccine mandate.

“The Department of Defense is violating the First Amendment to the Constitution, federal law and [DOD] regulations,” First Liberty said in a May 27 release. “The vaccine mandate substantially burdens the service members’ free exercise of religion, and the Department of Defense has failed to prove it has a compelling government interest, or that there are no less restrictive ways to further its effort to mitigate the COVID-19 virus .”

Active duty airmen and guardians were required to be fully vaccinated as of Nov. 2, 2021, followed by reservists on Dec. 2 and guardsmen on Dec. 31, 2021.

Thousands of service members across the Defense Department have cited their faith as a reason to get out of receiving COVID shots, though they have been largely unsuccessful. The military offers exemptions to people whose religions oppose using modern medicine, like Christian Scientists, but the waivers have become a sought-after tool for anyone looking to avoid the politically polarized vaccines.

For instance, some Catholics argue they can’t take some vaccines that are loosely tied to cell lines derived from abortion. However, the shots do not contain fetal cells, and the Catholic Church endorses vaccination against COVID-19. Others, like evangelical Protestants, eschew the shots on the grounds that their health is in God’s hands.

Eighty-five religious accommodations had been approved as of May 24, when the Air Force most recently updated its statistics. Almost 8,900 requests were turned down, including more than 2,700 appeals that were denied.

In comparison, the Air Force has granted about 1,800 waivers for those with certain medical conditions and for those who were planning to leave military service.

After approving its first nine religious accommodation requests earlier this year, the Air Force said in February it had decided that those waivers would not affect mission readiness.

More than 3,400 religious waiver requests were still pending as of May 24, as well. Most are first-time asks, plus nearly 900 appeals in progress.

Religious exemptions must be approved at the command level after a chaplain vets an airman’s sincerity. Airmen whose applications are denied can appeal to the Air Force surgeon general. Anyone whose waiver is still under consideration does not have to be vaccinated.

About 400 troops in the Department of the Air Force, which also includes the Space Force, were separated from the military as of May 23 for forgoing inoculation. Active duty airmen and title 32 guardsmen who wanted to get out were required to leave by April 1, or no later than the beginning of the fifth month after their last appeal was rejected.

There’s little visibility into the number of troops who specifically asked to retire or separate because of the mandates.

The Air Force doesn’t require airmen and Guardians to state a reason for applying to leave, and those who do provide a reason aren’t representative of the whole, Air Force spokesperson Rose Riley said May 6.

“The Department of the Air Force does not have a consistent official mechanism for tracking this data set, although commanders are monitoring and assessing local requests to minimize disruption of mission accomplishment, which thus far has not presented a concern in any particular Air Force specialty, Riley said.

The service does track the legal actions that lead up to an airman’s involuntary separation for remaining unvaccinated. Airmen who haven’t gotten the shots are listed in the military’s medical system as “overdue on a readiness item,” she added.

Military leaders have encouraged their forces to get the jab and lessen the likelihood that long-term effects of coronavirus infection and a higher death toll will deal a blow to combat readiness.

Americans have reported more than 84.6 million cases of COVID-19 since the pandemic began in December 2019, according to the Centers for Disease Control and Prevention, though the true total is likely higher in part because of at-home testing.

More than 1 million people in the United States have died as a result of the virus, including 165 Air Force and Space Force service members, civilian employees, contractors and their dependents.

More than 66% of Americans, or 221.5 million people, have gotten both of a two-dose Moderna or Pfizer vaccine regimen or the single-shot Johnson & Johnson version. About 47%, or 103.9 million, of them are further protected with at least one recommended booster dose.

Approximately 17% of Americans ages 5 and older remain unvaccinated (the shots are not yet authorized for the youngest children), and are at drastically higher risk of severe illness and death without that protection.

“All COVID-19 vaccines currently available in the United States are effective at preventing COVID-19,” the CDC said. “COVID-19 vaccination helps protect you by creating an antibody response without you having to experience sickness. Getting vaccinated yourself may also protect people around you.”

Unvaccinated people who have already contracted the virus are more than twice as likely to catch COVID-19 again than their previously infected, vaccinated counterparts, the agency added.

Rachel Cohen joined Air Force Times as senior reporter in March 2021. Her work has appeared in Air Force Magazine, Inside Defense, Inside Health Policy, the Frederick News-Post (Md.), the Washington Post, and others.

APYX ALERT: Bragar Eagel & Squire, P.C. Announces that a Class Action Lawsuit Has Been Filed Against Apyx Medical Corporation and Encourages Investors to Contact the Firm