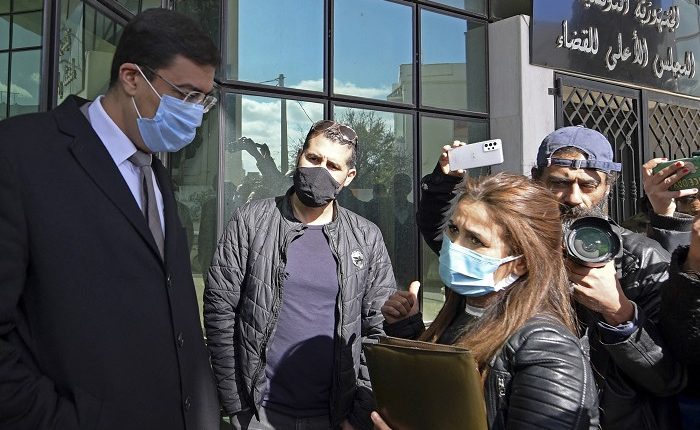 The United States, for its part, said it was “deeply concerned” by Saied’s action.

TUNIS – Tunisian police on Monday blocked access to the country’s top judicial watchdog in a move its chief slammed as “illegal”, two days after President Kais Saied dissolved the body.

The United States, for its part, said it was “deeply concerned” by Saied’s action.

“We don’t know who issued these orders, but we know that they have no legal basis,” CSM president Youssef Bouzakher told AFP.

Saied dissolved the body on Sunday, months after sacking the government and seizing wide-reaching powers in Tunisia, often lauded as the only democracy to emerge from the 2011 Arab revolts.

Washington said Monday it was “deeply concerned” by the decision to dissolve the watchdog.

“An independent judiciary is a core element of an effective and transparent democracy,” said State Department spokesman Ned Price.

“It is essential that the government of Tunisia holds its commitments to respect the independence of the judiciary, as stipulated in the constitution.”

Saied’s supporters say his power grab on July 25 was necessary after a decade of misgovernance by corrupt political parties.

Saied vowed Monday that he would not interfere in court cases or judicial appointments.

“I will never interfere with the judiciary,” he said, adding that he had only taken the CSM decision “because it had become necessary, and because the Tunisian people want the country to be cleansed”.

Speaking to Prime Minister Najla Bouden in a filmed meeting posted on his Facebook page, he said the courts had been the scene of “farces”.

“Whoever thought the judiciary was a tool to achieve his own personal or political goals must know that he will never be able to infiltrate the courts.”

But critics say Saied has pushed the country down a dangerous route back towards autocracy.

Bouzakher said the closure of the CSM “proves that we have entered a phase where the executive is using force to seize control of all state institutions, including the judiciary”.

Warning of threats to “rights and liberties”, he said the CSM would carry on with its work.

Saied had said Sunday that the CSM was corrupt and had delayed politically sensitive investigations into the assassinations of left-wing opposition figures Chokri Belaid and Mohamed Brahmi.

The CSM said he lacked the legal and constitutional authority to dissolve it.

The body, created in 2016, consists of 45 magistrates, mainly appointed by parliament, and has the power to appoint judges.

$35 Insulin Cap Is Welcome, Popular, and Bipartisan. But Congress May Not Pass It Anyway.