Trump Judicial Appointment May Protect Him 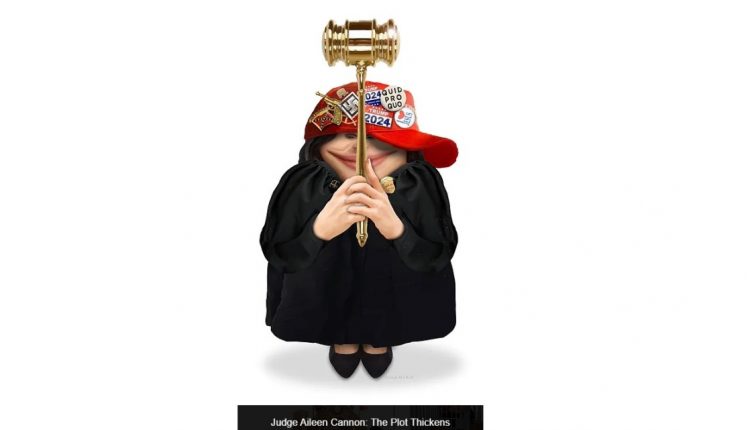 Donald Trump’s packing of the federal courts with judges chosen by the right-wing Federalist Society during his presidency is reaping dividends for him.

Two weeks after the FBI lawfully seized 11,000 government documents (more than 100 of them with classification markings) from Mar-a-Lago on August 8, Donald Trump asked a Florida judge to delay the Department of Justice’s (DOJ) investigation into three alleged federal felony charges. Instead of filing his motion in the District of Columbia where the search warrant was issued, Trump went forum-shopping and chose a judge whom he had appointed to the bench.

Trump requested that US District Judge Aileen Cannon appoint a “special master” to sift through all of the seized documents for materials that might be covered by the attorney-client privilege and executive privilege.

In a September 5 order replete with shoddy legal reasoning, Judge Cannon, a member of the Federalist Society, complied with Trump’s request.

Despite the fact that the DOJ’s filter team had already examined the documents and set aside those that might be protected by the attorney-client privilege, Judge Cannon empowered a yet-to-be-named special master (probably a retired judge) to inspect the documents. Pursuant to the judge’s order, the special master’s remit will also include sorting them for any protected by executive privilege.

After consultation with the acting national archivist, President Joe Biden declined to assert executive privilege over the seized documents. Moreover, it is not the role of a special master (who generally sorts documents seized from lawyers’ offices for attorney-client privilege) to make determinations about executive privilege.

In December 2021, Trump tried to prevent the National Archives from turning over government documents to the House Select Committee investigating the January 6 insurrection. US District Judge Tanya S. Chutkan roundly denied Trump’s executive privilege claim, noting that “Plaintiff [Trump] does not acknowledge the deference owed to the incumbent President’s judgment. His position that he may override the express will of the executive branch appears to be premised on the notion that his executive power ‘exists in perpetuity.’” But, Judge Chutkan noted, “Presidents are not kings, and Plaintiff is not President.”

Judge Cannon ruled that while the special master peruses the documents, the DOJ must halt its review and use of any of the materials seized from Mar-a-Lago for investigative purposes. But she did allow the government to continue its review and use of the seized materials “for purposes of intelligence classification and national security assessments.”

Expressing concern about the “appearance and integrity under the extraordinary circumstances” of this case, Judge Cannon worried that Trump might suffer “reputational harm” from a “future indictment.” Writing that the seizure of materials was “in a league of its own,” she fretted that Trump could endure a “stigma.” As some of the materials seized on August 8 included personal records, Judge Cannon wrote that Trump would face “unquantifiable potential harm” from the “improper disclosure of sensitive information to the public.”

On September 8, the DOJ filed a notice of appeal of Judge Cannon’s order in the Eleventh Circuit Court of Appeals.

In addition, the DOJ filed a motion asking Judge Cannon for a partial stay of her order pending appeal. It requested that she lift her injunction on the DOJ’s review and use of the 100-plus documents with classification markings for its criminal investigation. The DOJ also asked Judge Cannon to exclude the 100-plus documents with classification markings from the special master’s review of the 11,000 documents.

Indeed, on September 6, The Washington Post revealed that some of the documents seized at Mar-a-Lago contained highly secret material about a foreign nation’s nuclear capabilities.

In its motion for a stay, the DOJ said it would make available to Trump all unclassified documents seized in the search, both personal and government records, and would return Trump’s personal items that weren’t commingled with classified records.

The Presidential Records Act says, “The United States shall reserve and retain complete ownership, possession, and control of Presidential records.” Trump, the DOJ argued, has no right to the “return” of classified documents since they are not his property and would not reveal sensitive personal information.

Trump proposed retired Federal District Court judges Raymond Dearie (a Reagan appointee) and Paul Huck (former Florida deputy attorney general). Dearie was US Attorney for the Eastern District of New York and served on the Foreign Intelligence Surveillance Court. Huck, founder of The Huck Law Firm, is married to a Trump-appointed judge on the Eleventh Circuit Court of Appeals.

Team Trump wants the special master to review all seized documents, including the 100-plus items with classification markings and evaluate them for executive privilege. Trump suggests that the special master’s work be completed within 90 days.

Judge Cannon will consider the positions of the two parties, appoint the special master and determine the parameters of his or her work.

The DOJ’s appeal of Judge Cannon’s September 5 ruling will be heard by a three-judge panel of the Eleventh Circuit. Six of the eleven active judges on that court are Trump appointees. If Cannon selects Huck as special master, his wife would have to recuse herself from participating in the appeal. After the panel’s ruling, the entire appellate court could review the case en banc.

Trump appointed 226 judges to the federal courts. That includes 54 circuit court judges in four years, just one less than the 55 Barack Obama appointed during his two terms. Most federal appeal decisions are made in the circuit courts of appeals.

All of Trump’s Supreme Court appointments and approximately half of his federal court judges are members of the Federalist Society.

If an appeal related to the documents probe ultimately reaches the Supreme Court, six radical right-wingers — three of whom were appointed by Trump — will rule on it.

As Trump’s judicial appointees intervene on his behalf, they will present further obstacles to holding the former president accountable for his myriad crimes.

Crossposted with permission from TruthOut.