AUSTIN (KXAN) – A new class action lawsuit against a mattress company urges changes across the industry.

Lawyer Lloyd Cueto with Cueto Law from near St. Louis and lawyers from the Environmental Litigation Group from Birmingham re-filed an amended version of the lawsuit against mattress manufacturer Zinus in April.

The mattresses are sold online and in large retail stores.

“It’s really dangerous, not only the property damage to people, but also the health problems,” explained Cueto. “We have over 200 plaintiffs in all 50 states and people are realizing they are not alone in this.”

READ: Sleeping on a Memory Foam Mattress? A Round Rock family has a warning

He explained that families had difficulty breathing and skin irritation, and were forced to throw items away after removing the cover to wash them.

Cases all over Texas

According to Cueto Law, clients had itchy / irritated skin and difficulty breathing (courtesy of Cueto Law).

Almost 30 of the cases included in the lawsuit are from across Texas, according to Cueto.

Cueto said the problem is that Zinus has a removable zippered outer shell.

“The very existence of a zipper invites the owner to unzip or makes you think it’s safe to do so,” explained Cueto. “And there isn’t nearly enough warning of exposure to the fibers once you open them.”

“Leave the cover on”

A statement from Zinus stated that the company offers quality products and takes all customer feedback very seriously.

“The material we use to comply with fire regulations is standard in the mattress industry, and the Consumer Product Safety Commission has determined that this material is not classified as hazardous,” the statement said.

A spokesperson didn’t respond to questions about whether the company would remove the zipper or stop using fiberglass.

“All Zinus product owners should refer to the FAQ page on our corporate website, which covers many frequently asked questions, including proper care and handling of mattress covers,” the statement said.

On the page with the frequently asked questions it was explained: “The mattress cover is not washable. If you remove it, it can affect the fire barrier. So always leave the cover on. “

“You have to take these mattresses off the market because they are now on the market. And we don’t think they’ll have to wait for a federal recall to force them, ”Cueto said.

He said the lawsuit will also mean compensation for the families affected. Cueto stated that the families spent an average of $ 15,000 removing all of the fiber.

He said this is an industry-wide problem and he is now looking at other manufacturers.

Michelle Cantrell spent thousands of dollars removing all of the fiberglass in her home. 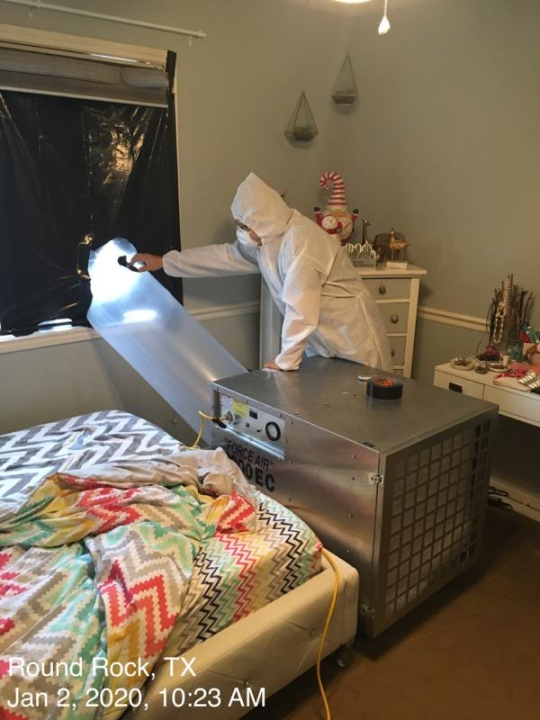 “It was literally like dust was getting all over the place, it was just like that, only it was glass,” Cantrell explained.

The Round Rock family warned about their daughter’s memory foam mattress shortly before the pandemic last year.

They said they bought their mattress online from another company, which ultimately reimbursed them, but they explained that their home was covered in what looked like glitter.

After doing some research, Cantrell found that it was fiberglass. They had opened the lid to wash it and noticed a crack. A few days later she said they felt itchy and coughing.

“There was no warning sign near the zipper or cover or anything,” Cantrell explained.

What is being done at the federal level?

Doost asked CPSC why there wasn’t a recall. An agency spokesman responded with exactly the same statement as last year.

“CPSC has binding requirements for mattresses and mattress toppers. The regulations are performance standards, not design standards. They therefore do not specify the use of any particular material or component, ”said Nychelle Fleming, public affairs specialist at the agency.

She added, “It is recommended that you follow the manufacturer’s instructions for washing and drying textile products, including mattress toppers. Many textile products lose fibers through normal wear and tear and reconditioning. Without scientific analysis, it would be difficult to determine the type of fiber. “

Fleming said concerns should be reported at www.SaferProducts.gov, but it is unclear what these reports do as hundreds have been made online. However, she said the company is reviewing all complaints filed online.

Uber Canada to shift operations from Netherlands after…