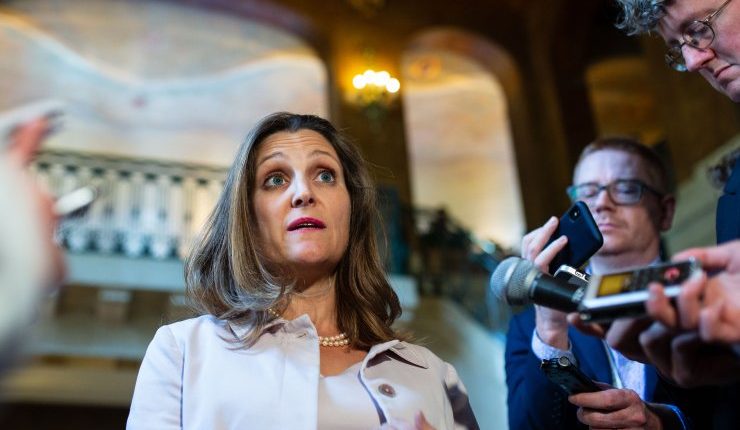 A Cree woman who was taken from her mother and placed in care as a child says the cycle of assimilation that began with residential schools continues with the overrepresentation of indigenous kids in the child welfare system.

Cheyenne Stonechild is the representative of plaintiff in a newly certified class-action lawsuit against the federal government on behalf of Indigenous children taken from their families while living away from reserves and placed in non-Indigenous care.

“Authorities removed me from my mother when I was eight years old, and I spent the rest of my childhood tossed between at least 15 different foster homes and group homes,” said Stonechild, whose mother was also taken from her family during the ’60s Scoop, and whose grandmother was a residential school survivor.

Get top stories in your inbox.

Our award-winning journalists bring you the news that impacts you, Canada, and the world. Don’t miss out.

“I was completely isolated from my community and my identity as a Cree woman. I was deprived of any access to my culture, my language and my indigenous rights,” she said during a news conference on Monday.

There are three times as many Indigenous children in care today than there were in residential schools at their peak, Stonechild said.

The class-action claim is based on Canada’s duty to protect Indigenous children in care from harm, specifically as it relates to the loss of their Aboriginal identity.

It alleges Ottawa’s actions breached the Charter of Rights and Freedoms and demonstrated systemic negligence, claims that haven’t been proven in court.

What people are reading

The lawsuit challenges Canada’s role between Jan. 1, 1992 and Dec, 31, 2019, in allowing Indigenous children in state care to be placed in non-Indigenous homes.

In a decision released online Monday, Federal Court Judge Michael Phelan ruled it can go ahead as a class action for those affected in all provinces and territories.

“Canada has repeatedly said it seeks reconciliation and resolution. Despite the lengthy period over which the offending acts occurred, that has not happened and there was no suggestion that it was likely or that a vehicle for resolution existed,” the decision said.

The class is asking for various damages, restitution and recovery of specific costs on behalf of affected status and non-status First Nations, Inuit and Métis children and families who were not living in reserve communities.

Ottawa reached an agreement in principle last year to provide $40 billion to reform the Indigenous child welfare system and compensate youth and their families from reserves, leaving a gap for off-reserve children like Stonechild.

“I ask the Canadian government, why? Why is this treatment different?” she asked.

“We are no less harmed by the (child welfare) system, and we are no less Indigenous. We hope that Canada sees us, and does the right thing.”

Max Faille, a lawyer for the plaintiffs, said Canada has drawn an “arbitrary and very disturbing line” between on- and off-reserve Indigenous children taken into care.

“Canada’s approach to off-reserve Indigenous children is a stubborn continuation of the policies of assimilation that were at the heart of residential schools,” he said during the news conference.

“What Canada has said … is that off-reserve Indigenous children are not their problem and should be left to provincial responsibility, quote, ‘just like all other Canadians.’ That’s a political way of saying that they’re no longer really indigenous.”

Angela Bespflug, another lawyer for the plaintiffs, said the overrepresentation of Indigenous children in care “has become a humanitarian crisis.”

“Despite Canada’s constitutional responsibility for all Indigenous people, Canada has failed to take steps to protect and preserve the Indigenous identify of off-reserve children and youth in care,” said Bespflug.

The Federal Court decision said granting certification for a single class-action would avoid the prospect of 13 provincial and territorial separate actions “being pursued by one of Canada’s most disadvantaged groups.”

The federal government argued in court that the provinces and territories should be involved in the legal process, but the judge said the Crown didn’t address how it could be done for a national class-action lawsuit.

A statement from the office of the federal minister of Crown-Indigenous Relations said it is reviewing details of the court’s decision.

“We will continue to work closely with Indigenous partners as this and other class-action processes move forward,” it said.

Cindy Blackstock, executive director of the First Nations Child and Family Caring Society, said Canada has apologized for residential schools, but it has continued the same policies through the child welfare system.

“We call on Canada to stop fighting off-reserve Indigenous children in court, and to step up to the plate and lead, and to finally bring about the changes that are needed to fix this deeply broken system,” she said in a statement.

This report by The Canadian Press was first published June 20, 2022.