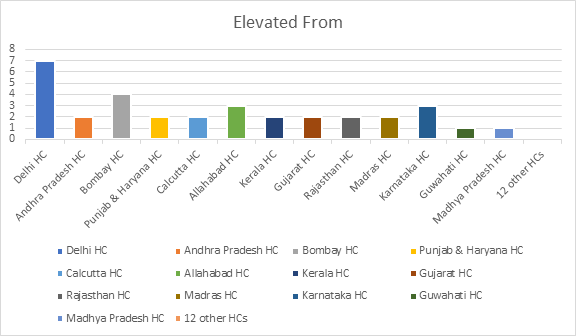 It all started with a police demand for police custody being placed in the ordinary course before Justice Akil A. Kureshi’s court in the Gujarat High Court in 2010.

Justice Kureshi brought to bear on this matter the same high integrity, independence and commitment to the rule of law that he brings to every issue he is asked to decide as a judge. After careful consideration of law and facts, Justice Kureshi granted custody. As luck would have it, the person sent by Justice Kureshi to police custody was Amit Shah, then a Minister of State in the Gujarat government under the Chief Ministership of Narendra Modi. That fateful judicial decision, taken purely as a matter of conscientious judicial application of the law, changed the course of Justice Kureshi’s judicial career.

Starting from 2018, when he came into the zone of consideration for appointment as a High Court Chief Justice and to the Supreme Court, Justice Kureshi was singled out by the Supreme Court collegium for continuous hostile treatment on at least four occasions.

First, only some eleven days into his tenure as Acting Chief Justice of Gujarat, Justice Kureshi was transferred by the Supreme Court collegium to the Bombay High Court in November 2018 as the fifth judge in order of seniority.

It was, in effect, a demotion.

The Gujarat High Court Bar strongly protested against this vindictive removal of Justice Kureshi from the position of Acting Chief Justice of Gujarat.

Second, after unceremoniously sending him to Mumbai, the collegium sat on his appointment as Chief Justice for over six months, again drawing wide criticism.

Third, when the Government of India refused, for months, to implement the collegium’s May 2019 recommendation to appoint Justice Kureshi as Chief Justice of Madhya Pradesh — even prompting an outraged Gujarat High Court Advocates Association to move the Supreme Court asking for a direction to the Union to promptly do so — instead of enforcing its decision, the collegium changed Justice Kureshi’s appointment to Tripura in September 2019.

Fourth, in what is widely seen as blatant injustice, Justice Kureshi was not included by the Supreme Court collegium in the August 17, 2021 list of nine new appointees to the Supreme Court, without providing any reason or justification.

No reasons have been publicly provided for these adverse decisions. Nor has a single issue against Justice Kureshi’s conduct, competence or integrity been raised in these three years.

Why has Justice Kureshi not been promoted?

The extraordinary nearly-two-year pause in collegium recommendations for appointment to the Supreme Court after 28 August, 2019 until 17 August 2021 shows that there are no objective reasons to justify the hostile treatment of Justice Kureshi.

Justice Nariman’s position on this issue is evidence that there are no legally valid objective reasons for not elevating Justice Kureshi to the Supreme Court — had that not been the case, Justice Nariman would never propose Justice Kureshi’s elevation. Nor is this surprising because even in the Gujarat legal ecosystem and now in Tripura, Justice Kureshi enjoys unqualified appreciation and support for his exceptional merit, conduct and integrity.

We can also rule out personal animosity against Justice Kureshi on the part of any member of the collegium as a cause of the hostility he is facing. This is because collegium membership changes frequently and the membership today is wholly different from when the saga began in October 2018.

It is clear therefore that the opposition to Justice Kureshi comes from outside the judicial system.

The momentous issue of immense Constitutional consequence arising from the Kureshi saga is that it exposes the grave risk that external retribution harboured by individuals or groups outside the judicial system against judges solely on account of their conscientious judicial decisions can be delivered through the Supreme Court collegium in a sustained and un-abating manner over a prolonged period across a changing collegium membership.

This is a grave threat to the rule of law and independence of the judiciary. No High Court judge in our country will be secure unless this vulnerability is corrected.

The underlying weakness that causes this vulnerability is not hard to locate. It is the unbounded, non-accountable and arbitrary nature of the power vested in the Supreme Court collegium by the second and third of the popularly known ‘Three Judges Cases’ (Supreme Court Advocates-on Record Association vs Union of India (1993) and In re Special Reference 1 of 1998).

The flaws in the collegium system were implicitly recognized by the Supreme Court bench which struck down the 99th Constitutional amendment in 2015 establishing a National Judicial Appointments Commission when it invited suggestions for the improvement of the collegium system and asked on November 2, 2015 that the suggestions be organized around four themes: enhancing transparency, fixing eligibility criteria for appointment of judges, establishing a complaints mechanism, and the need for a separate secretariat for the collegium.

The Court was right. Lack of transparency, lack of fixed criteria for selection or process, lack of accountability, lack of a professional secretariat and the absence of independent review of its decisions are critical flaws. They add up to an explosive cocktail of arbitrariness which is open to manipulation by means fair and foul.

There is empirical evidence of these flaws. Although the collegium system is notoriously secretive, in a brief two-year moment of glasnost between October 3, 2017 and October 3, 2019 initiated by Chief Justice Dipak Misra and shut down by Chief Justice Ranjan Gogoi towards the end of his tenure, some 249 collegium-related documents were made publicly available by the Court (they are still available on its website). These 249 documents provide a thin sliver of information on collegium deliberations including names of members of the collegium, some broad statements on grounds of decision, feedback (for High Court appointments) and details of the persons being recommended. These documents include 13 documents on collegium deliberations pertaining to the appointment of 18 Supreme Court judges that took place during this two year period.

Scattered across these 13 documents on Supreme Court appointments are 13 criteria mentioned by the collegium with reference to the selection of Supreme Court judges. They fall into four categories: merit, seniority, institutional considerations; and feedback.

Thirteen selection criteria: have they been consistently applied?

The 13 criteria are: (i) “merit” (once or twice the word ‘competence’ is used as a synonym for merit); (ii) integrity; (iii) conduct; (iv) relative merit — the selected judge should be “more deserving and suitable in all respects than other Chief Justices and senior puisne Judges of High Courts for being appointed as Judges of the Supreme Court of India”; (v) “combined seniority on all-India basis of Chief Justices and senior puisne Judges of High Courts” (an implicit criterion seems to be that, barring a few exceptions, generally only chief justices of high courts are appointed to the apex court from the Bench); (vi) inter-se seniority in the parent High Courts; (vii) representation of High Courts in the Supreme Court, including the size of the High Court and its ‘importance’ (for example, in the case of Delhi, its location in the national capital); (viii) desirability of giving due representation on the Bench of the Supreme Court, as far as possible, “to all sections of the society including those belonging to SC/ST/OBC categories, women and minorities”; (ix) feedback from the senior-most Judge in the Supreme Court from the High Court from where the person recommended comes or, in the absence of such feedback, the next senior-most such judge (this is required by the “Memorandum Showing The Procedure For Appointment Of The Chief Justice Of India And Judges Of The Supreme Court Of India” (MOP)); (x) optional feedback from non-judges as provided in the MOP; (xi) any feedback from the Executive (e.g., intelligence reports) prior to the making of the recommendation; (xii) Government views asking for reconsideration of the recommendation; and (xiii) absence of “adverse” information significant enough, in the opinion of the collegium, to rule out selection.”

The collegium has also identified an over-arching principle that, “[T]hough inter-se seniority amongst Judges in their High Courts and their combined seniority on all-India basis should be given due weightage, merit should be the predominant consideration.”

A close analysis of these documents show that these thirteen broad criteria are simply not applied in a principled, consistent or objective manner.

Let us take a few examples by way of illustration. “Merit” (a word which means that which is worthy of appreciation and reward) is held out as the over-arching criteria. However, even after a quarter-century, the collegium has not provided objective benchmarks to determine merit in the selection process. It is not at all clear, for example, on what basis the collegium can possibly conclude, as it has done in several cases, that those recommended are “more deserving and suitable in all respects than other Chief Justices and senior puisne Judges of High Courts for being appointed as Judges of the Supreme Court of India”.

It seems that the merit is assessed in an impressionistic and subjective manner, rather than in a structured manner assuring objectivity of assessment.

The rationale and legal basis for the criterion of representation of High Courts in the Supreme Court is unclear beyond what has been identified by the Supreme Court on the judicial side as a “reasonable expectation” of elevation (which should have weighed in Justice Kureshi’s favour). There is no benchmark for adequate representation. 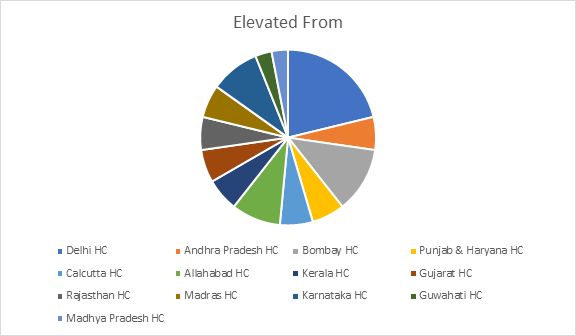 The social representation criterion is highly skewed in favour of Hindu Savarna males. The August 17, 2019 appointments has only further exacerbated the problem, with seven of the nine appointees being from Savarna castes. The representation of Muslims remains abysmal — there is only one Muslim judge on the apex court out of 31 judges. The exclusion of Justice Kureshi — the second most senior judge in the country amongst High Court judges and one of the handful of Muslim High court judges we have. The representation of SCs, STs and OBCs, too, is grossly inadequate. The appointment of three additional women judges is a very positive step, but it is too little. Women, drawn from diverse social backgrounds, need to constitute 50% of the court at the minimum. 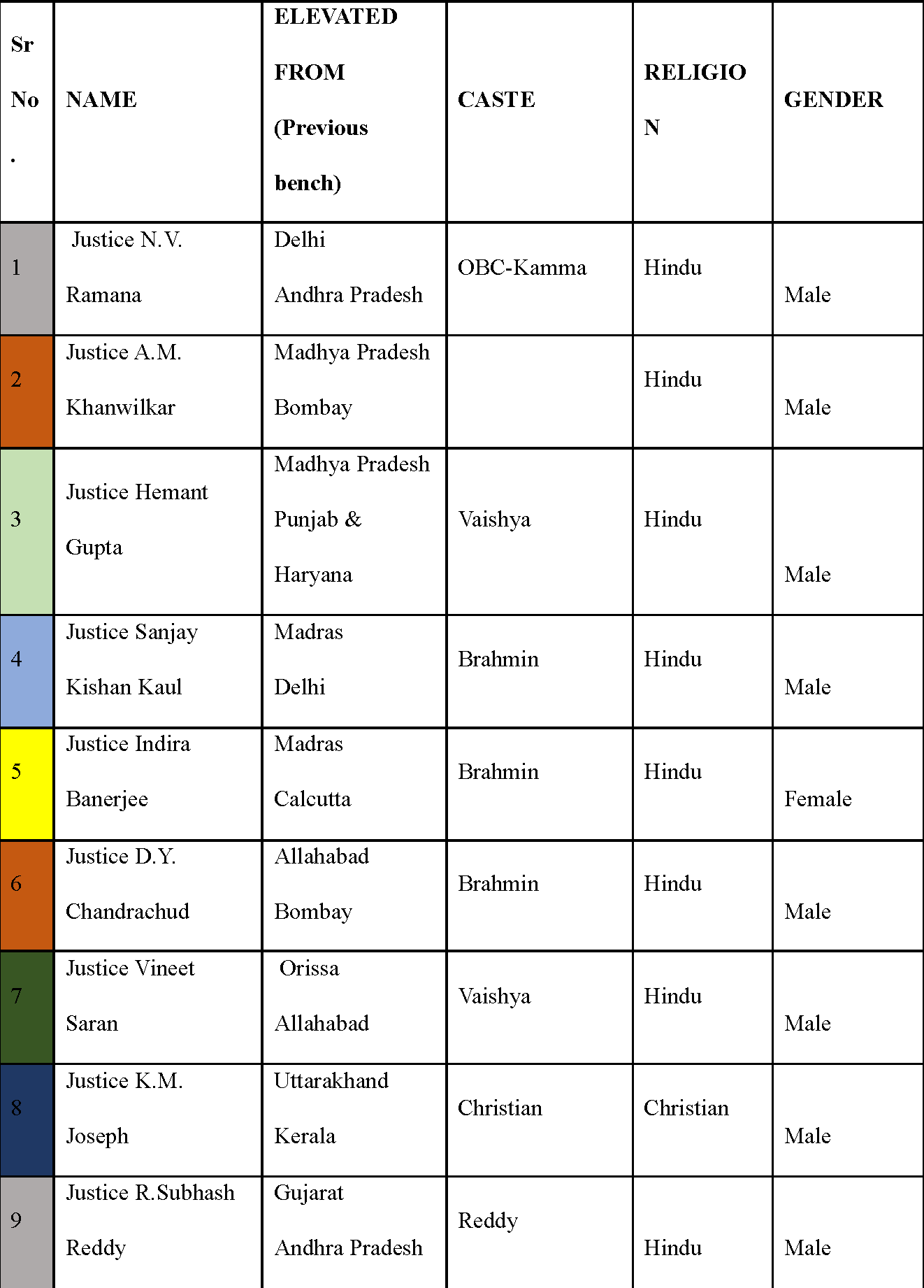 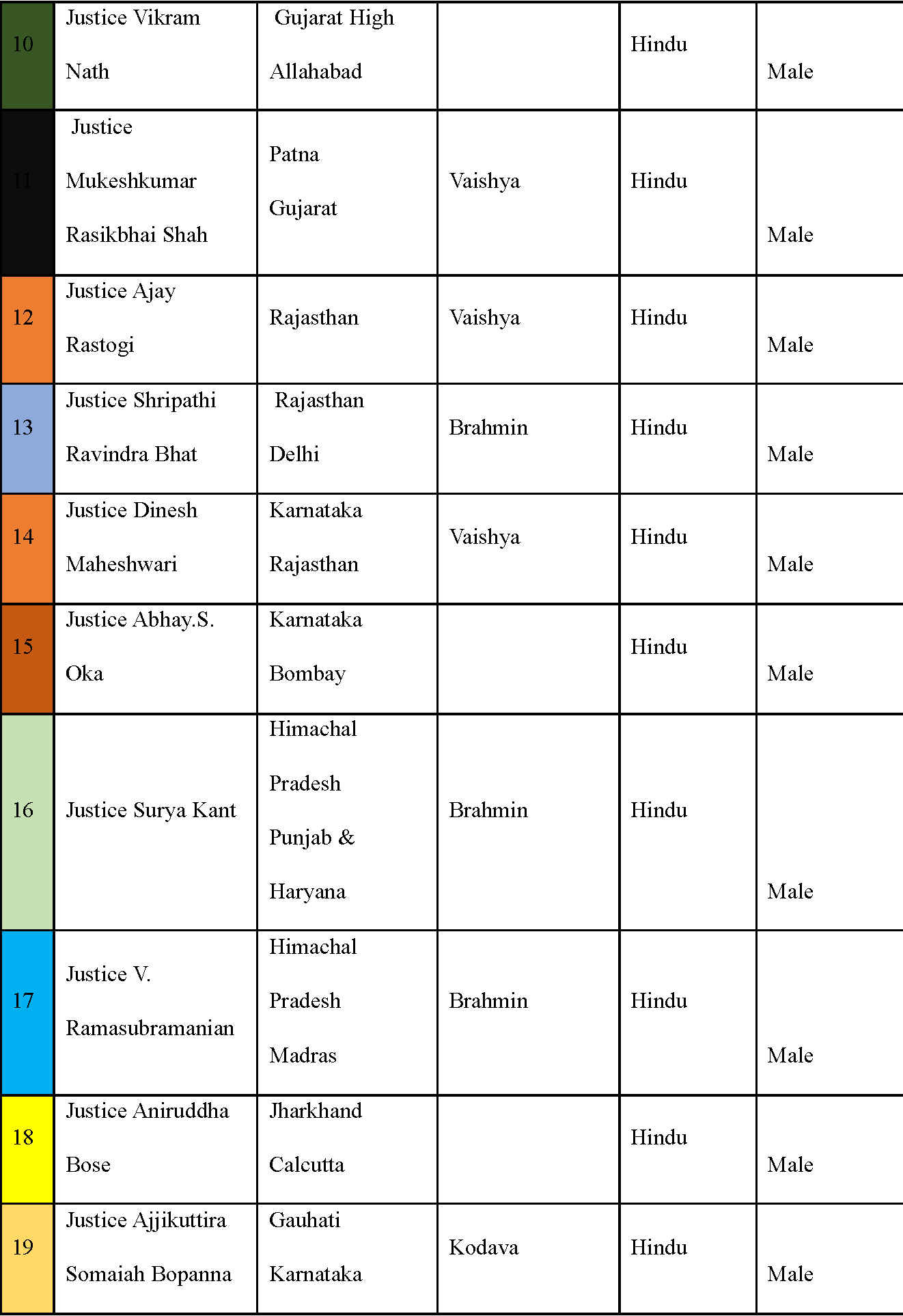 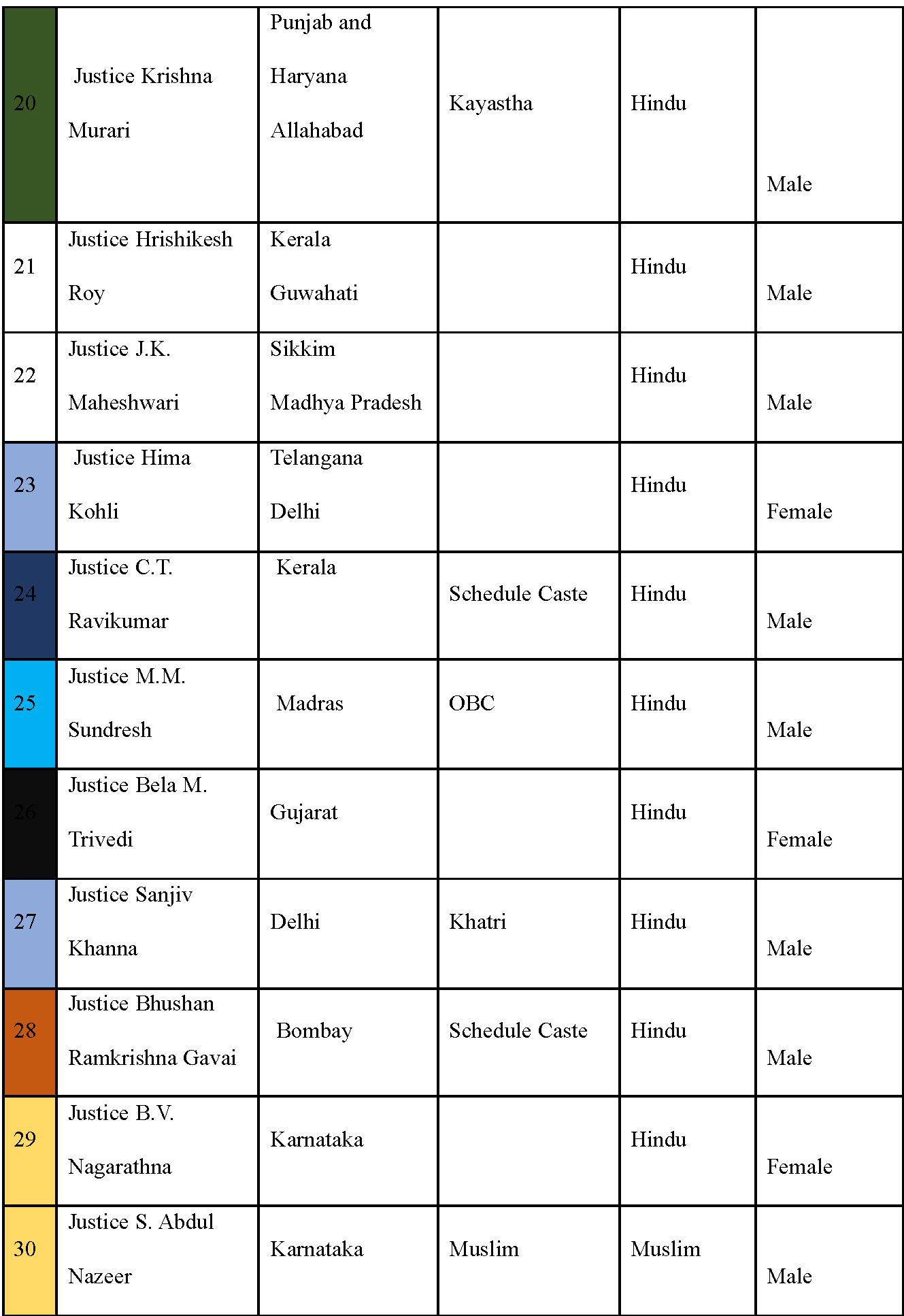 Note: Caste, religion and gender data is based on publicly available sources. Cells have been left blank for judges for whom particular information was not available.

The analysis of these 13 documents on 18 Supreme Court appointments shows that the collegium system as a whole is structurally arbitrary. In addition, power is concentrated in too few hands, in what would qualify as an oligarchy — a prescription for abuse. There is no provision for independent review of the collegium’s decisions.

It is the structural arbitrariness of the collegium system that is allowing external retribution to penetrate the walls of the collegium and block Justice Kureshi’s appointment over multiple years. Other democracies — including common law jurisdictions such as U.S. and U.K. — have much more robust systems for selection of apex court judges that are insulated against manipulation by their transparency, objectivity and accountability.

In a rule of law democracy, no State action should be allowed to take shelter behind the feudal history of arbitrary judicial appointments that are beyond review. If the removal of Supreme Court and High Court judges is subject to judicial review (as it is), so should their appointment.

In the longer term, we must work to end the oligarchic system of judges appointing themselves. India deserves a modern, transparent, fair, democratic and objective system for selecting our High Court and Supreme Court judges in line with our Constitutional ethos.

The article was originally published in The Leaflet.