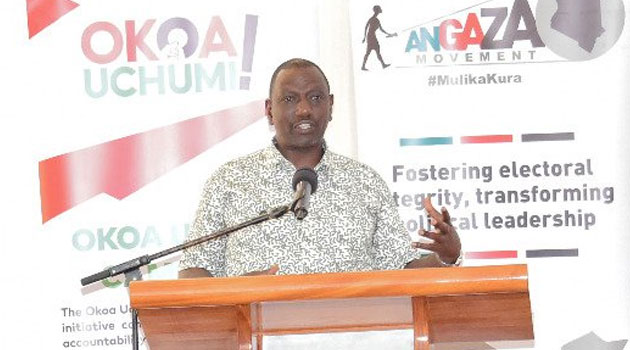 Ruto termed the move unjustified and a blatant interference of independent institution.

In a meeting with civil societies on Tuesday, Ruto stated the move deprived the Judiciary the functionality in the fight against graft by undermining efforts to enhance human resource.

“We must stop the fight with the Judiciary. I have said that it doesn’t matter who is nominated by the Judicial Service Commission. They don’t have to be my friend. I don’t have to like them. If they have passed the interview and they have gone through the process, they must be given a chance to serve,” he said.

The country’s second in command faulted his boss saying that his administration will be devoid of personalized attacks aimed at intimidating other arms of government.

“Like the six judges who haven’t been appointed. Why? I would appoint the judges day one and give everyone the capacity to serve,” Ruto stated.

The Head of State turned down the nominations of the six judges to the Court of Appeal and the Environment and Lands Court although the law doesn’t give him room to exercise discretion on judicial appointments.

Article 166 (1) (b) provides that: “The President shall appoint — all other judges, in accordance with the recommendation of the Judicial Service Commission.”

The President appointed 34 of the 40 candidates nominated by the Judicial Service Commission (JSC) to the Court of Appeal, Environment and Lands Court, and the Employment and Labor Relations Court.

The six judges included Justices Aggrey Muchelule, George Odunga, Weldon Korir and Joel Ngugi, who were to serve in the appellate court.

Further Ruto said the war on graft is a lost war saying it has metamorphized to a personal war with the relevant institutions being weakened.

In a meeting with civil societies, Ruto pointed out that the fight against corruption should leave no one behind including President Uhuru Kenyatta.

“We must not personalize or politicize corruption. We must deal with it from an institutional space so that everyone including the president is held to account. The fight against corruption hasn’t gone any far because its directed by somebody from somewhere,” he said.

Ruto stated that the Fund will give the Judiciary financial independence, ensuring it works impartially.

DP Ruto said his administration will build and empower independent institutions that are charged with the fight against corruption.

“The institutions must be strong enough to deal with everybody and we will be held account for that. We have to deal with state capture and we have deal with conflict of interest,” he said.

Medical Bills Can Shatter Lives. North Carolina May Act to ‘De-Weaponize’ That Debt.