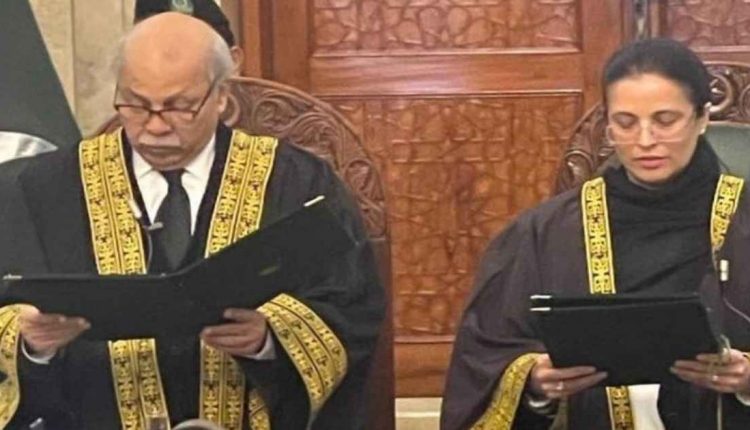 The appointment of Justice Ayesha A. Malik to the Supreme Court of Pakistan marks the first time in our history that a female judge has been admitted to the nation’s highest court. In a country that last year ranked third from the bottom in terms of male-female parity, the Judicial Commission of Pakistan’s vote in her favor can also be seen as a step towards gender equality in the highest echelons of the judiciary itself. Justice Ayesha’s nomination was rejected last September due to a lack of consensus in the JCP.

This year too, the vote in her favor was razor-thin: 5-4. Given that this is the second time this consideration has been made and provided that the Pakistan Bar Council had given directions to all other bars to oppose this recommendation, pushes one to reassess whether the time has arrived to seriously contemplate why the Judicial Commission of Pakistan was insistent regarding her nomination while bar councils had been opposing it so vehemently. In other words, it’s time to rethink this process altogether.

A historic day in Pakistan’s history

Attorney General of Pakistan Khalid Jawed Khan, who was among the 5 supporters of Justice Ayesha Malik’s appointment, revealed in an exclusive interview that he supports her appointment on the basis of merit and competence. The AG said that both historically and in terms of binding precedent, seniority alone was not the criterion. Previously, among the 41 junior judges elevated to the SC, three junior judges Justice Munib Akhtar, Justice Muhammad Amin-ud-din Khan and Justice Muhammad Ali Mazhar were elevated on the basis of “competence and reputation”.

Nevertheless, it is pertinent to highlight how in the absence of any specific constitutional, legal and procedural criteria to assess the “competence” of judges to be appointed to the Supreme Court, the bar association’s argument to stick to the principle of seniority cannot be ignored either. The position has been backed by reasoning laid down in the Al-Jehad Trust case, where it was stipulated that the criterion for elevation (and hence appointment) of judges to the superior courts of Pakistan should be based on the principle of ‘seniority’. The Al-Jehad Trust ruling was a significant step towards ensuring judicial independence by minimizing the executive’s role in these appointments and therefore has relevance to the appointment of the Chief Justice of the High Courts by adhering to this principle of seniority.

Regardless of the fact that the precedent had been violated on some occasions, it still remained, in legal principle, the only standard for such elevation. However, the principle of merit, on the other hand, is based on strong moral support. Given that judges are charged with deciding disputes, it argues that the best at it must be exalted. Hence, given that Honorable Justice Ayesha Malik is highly competent and dignified, there is no moral impediment to her elevation in this context. Moreover, there is no explicit provision of seniority in the Constitution of Pakistan for the appointment of judges of the Supreme Court, nor is there any constitutional convention.

Despite all that is contrary to the complexity of this question and admitting that there is more to discern, it is necessary to realize that this question is also leading towards something else that is worth examining: an idea that we need to rethink this process altogether and legislate upon it – an idea whose time has now come and requires immediate action. Therefore, for judicial appointments at all levels, it is high time for the Constitution of Pakistan and the Judicial Commission of Pakistan Rules 2010 to be amended to strengthen our judicial system.

A hope for Pakistan?

The appointment of a first woman judge to the Supreme Court of Pakistan is a beacon of hope for the nation, but institutionalism and ensuring genuine gender balance in the supreme judiciary can only be achieved when parliament not only reforms articles 175-A and 177 of the constitution but also initiates other important legal and procedural reforms, including women’s representation in the JCP.

Controversies can also be opportunities. They allow us to think about issues that we would otherwise not have considered. Therefore, in addition to seniority, which can be considered a vital component of such appointments, there should also be a criterion for determining a judge’s “competence and reputation” to ensure transparency and meritocracy. To develop robust criteria for judicial appointments and evaluation of the performance of higher court judges, guidance may be sought from the best practices in other jurisdictions.

In this regard, the Basic Principles on the Independence of the Judiciary, adopted by the UN General Assembly in 1985, the Council of Europe’s Commission for Democracy through Law (The Venice Commission), Black Letter Guidelines for the Evaluation of Judicial Performance developed by the American Bar Association, and The Appointment, Tenure and Removal of Judges under Commonwealth Principles may be examined.

It is only by establishing in clear terms what qualifies a judge for a higher position, and how one judge is more qualified than the other, that controversies will disappear and appointments such as that of Justice Ayesha Malik can be celebrated without reservations.

The writer is an Advocate of the High Courts of Pakistan and an Executive Member of International Bar Association. You can be reached at fizzaali95@gmail.com.

The views expressed in this article are the author’s own and do not necessarily reflect the editorial policy of Global Village Space.