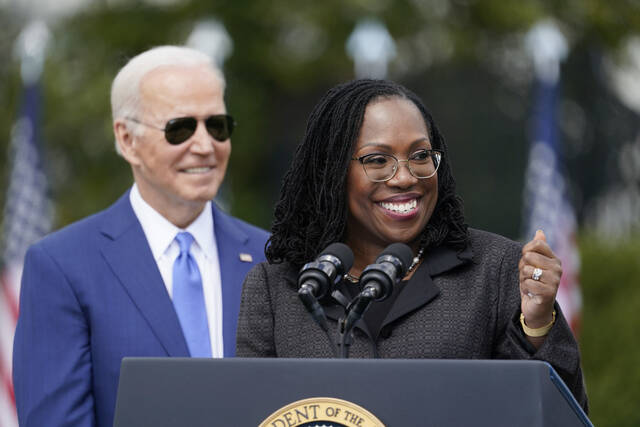 The country is headed for a train wreck on judicial appointments.

President Donald Trump appointed 228 federal districts and appeal judges and three Supreme Court justices, and with the help of the Federalist Society, pushed the judiciary harder to the right.

Now, President Joe Biden is taking the courts in the opposite direction and imposing the race and gender preferences of the progressive movement. After one year in office, Biden managed to win confirmation for 42 federal judges — more than three-quarters were women, two-thirds were people of color and only two were white males.

One could not ask for a better example of a pattern and practice of discrimination.

Biden has taken pains to appoint judges with experience as criminal-defense attorneys and public defenders. With the defund-the-police movement, the impunity of many prosecutors toward Larceny and the rise of violent crime in major cities, it should give us pause to think about the consequences of biasing federal judiciary toward defendants’ rights.

Justice Ketanji Brown Jackson crystallized these preferences. She was selected because she is a Black female, is a former public defender and was chosen ahead of Michele Childs, who has experience representing corporate interests, and Leondra Kruger, who is a genuine moderate.

It is no surprise that the Senate sees judicial confirmations through an ideological prism, because federal courts have stretched their reach beyond reason and abused judicial supremacy.

Consider abortion, gay marriage and transgender rights. Deciding and fashioning compromises on such divisive moral issues should be the province of lawmakers, not judges.

In United States v. Windsor, which struck down the Defense of Marriage Act, Justice Samuel Alito in his dissent states “Windsor and the United States implicitly ask us to endorse the consent-based view of marriage and to reject the traditional view, thereby arrogating to ourselves the power to decide a question that philosophers, historians, social scientists, and theologians are better qualified to explore.”

Justice Antonin Scalia expressed similar views on the hubris and arrogation of the courts on great social issues. Why should nine people, all of whom studied law at Harvard and Yale and live in a bubble of privilege, make such moral judgments for us about when life begins and whether boys who identify as female should be permitted to compete in girls’ sports?

The recently leaked draft decision in Dobbs v. Jackson Women’s Health Organization would strike down Roe v. Wade but more important appear to impose such judicial activism. However, the final weight of the decision remains to be seen.

Often Congress and state legislators, weighing the varying sensibilities of voters, have spoken in ways competing interests did not like. It should not be the job of the judiciary to redress those grievances — that’s why we have elections.

When the objections of aggrieved parties were brought to the federal courts, instead of denying jurisdiction and bouncing those back to the political bodies of government, the Supreme Court too often stretches the constitution and statute beyond a layman’s comprehension.

And it’s to a layman’s thinking, not the arcane theories debated in law journals, that the settling of moral considerations should appeal. Otherwise, we just fuel social rancor — consider abortion — and obtuse outcomes — consider the quarrels about schools teaching young children about sexual preferences.

Presidents have gotten into the habit of issuing executive orders where they lack legislated authority much like baseball players stealing signs — let’s see what we can get away with.

President Barack Obama admitted to doing so when he granted the DACAs temporary legal status but was not challenged in the courts during his tenure.

Last August, Biden publicly admitted to acting beyond the law when he imposed a second eviction moratorium.

Regarding the DACAs, the Supreme Court effectively imposed its own law by blocking Trump’s executive order to negate a plainly illegal act by his predecessor and declining to pressure the Congress to finally reach a solution on immigration.

If the courts are to be our legislature of last resort, it is only logical that the Senate addresses court appointments — and especially Supreme Court appointments — as exercises in raw power. It’s abandoning to surrogates its legislative responsibilities where it lacks the stomach to act or the demeanor to compromise.

Of the last four Supreme Court nominees, Jackson and Neil Gorsuch received only three Senate votes from the political party opposite the nominating president. Brett Kavanaugh one vote, and Amy Coney Barrett none.

After Republicans refused to vote on Obama’s nomination of Merrick Garland, it seems apparent that if the GOP wins the Senate and a justice retires or dies, Republicans will refuse to act on whomever Biden nominates.

A Supreme Court with only eight or even seven justices could finally join the issue of how we pick judges. We simply can’t have a winner-take-all system for judicial appointments — it’s social dynamite.

Peter Morici is an economist and emeritus business professor at the University of Maryland.