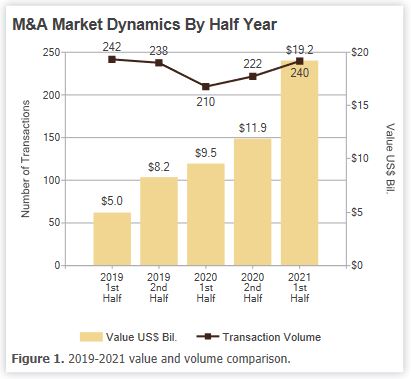 The total value of mergers and acquisitions in the education industry grew more than 50 percent from the second half of 2020 to the first half of this year as companies across the market quickly topped up their portfolios, according to a report from investment banking firm Berkery Noyes.

Deals made during this period were worth almost as much as mergers and acquisitions for full 2020, totaling $ 21.4 billion.

The investment group, which advises and finances medium-sized companies in the technology and information sector, pursued 1,152 educational deals between 2019 and June 2021.

Private equity financed 40 percent of acquisitions in the first half of the year, 8 percent more than the 2019-2021 overall average.

According to Berkery Noyes, 97 of the 240 deals during that period were funded by private equity, venture capital, or some other investment firm, most for at least three years and a 131 percent increase from the first half of 2020.

Twelve deals in the first half of this year were valued at more than $ 100 million, and at least seven of them were in the K-12 sector. About a third of the total transactions were valued between $ 4.5 million and $ 54.6 million.

K-12 Media and Tech outperformed professional training services as the most active market segment in the education industry for the year to date.

The report showed a mixed picture for market activity in various segments in the first six months of this year compared to the second half of 2020.

Does the Delta surge mean you should return to masks?