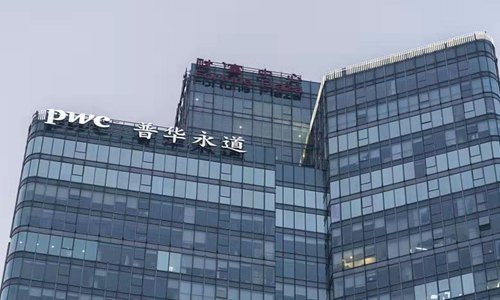 A look at the PwC Beijing office in January. Photo: VCG

China’s domestic mergers and acquisitions rose 6,177 transactions in the first half of 2021, the highest since early 2018, driven by the country’s focus on improving the domestic economy to enable a quick recovery from the COVID-19 pandemic, according to a report from global accounting and consulting giant PwC.

The volume of domestic strategic M & As increased 41 percent on an annualized basis in the first half of the year. Investments in private equity (PE) and venture capital (VC) were also strong.

The increase in M&A volume was mainly driven by industrial modernization, and activity in almost all sectors saw an increase, the report said. In contrast, cross-border inbound activities were impacted by Corona-related travel restrictions.

Outbound M&A remained in the doldrums, negatively impacted by both the pandemic and the geopolitical dispute. In terms of volume, financial buyers were the biggest players in outbound for the first time as China-based PEs looked for opportunities overseas.

China’s state-owned enterprises (SOEs), on the other hand, tended to turn their attention back to the domestic market. In general, high technology, industrial and consumer goods sectors remained the most preferred sectors by Chinese buyers.

“Driven by strong domestic strategic and PE deals activity, the first quarter of 2021 was strong in business combinations and acquisitions, but there was a relative slowdown in the second quarter, with some market uncertainties beginning to warn.

“Deals declined in value in the first half of 2021 as there were fewer one-off, government-sponsored and private-sector mega-deals,” said David Brown, deal leader for the Asia-Pacific region.

The deal value was $ 312.1 billion in the first half, 29 percent less than its peak in the second half of 2020, and returned to more normal levels, data from the report showed.

There were 45 mega-deals worth more than $ 1 billion in the first half of 2021, many of which were focused on key domestic economic topics such as industrial modernization and dual circulation.

M&A in China is likely to remain a domestic issue in the second half of the year, aided by dual circulation and industrial modernization programs and state-owned enterprise reforms.

“The impact of the pandemic and other uncertainties related to trade and geopolitical relationships will impact both domestic and cross-border M&A activity in the second half of the year.

“We expect a decline in the second half of the year compared to the first half of 2021, although both domestic strategic and PE / VC activities are likely to remain robust,” said Chris Chan, PwC’s financial services deals leader for mainland China and Hong Kong.

Bragar Eagel & Squire, P.C. Announces That a Class Action Lawsuit Has Been Filed Against Activision Blizzard, Inc. and Encourages Investors to Contact the Firm