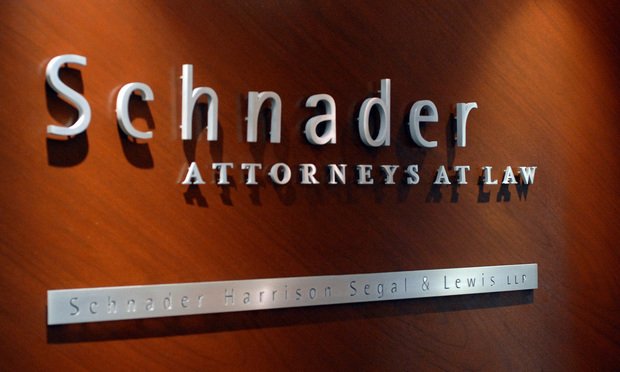 A trio of longtime former clients of Schnader Harrison Segal & Lewis are suing the firm after lawyers allegedly neglected to represent their interests in a bankruptcy proceeding. The former clients are claiming millions of dollars of lost benefits and tax liabilities.

Plaintiffs Herbert Vederman, Samuel Sidewater and Steven Sidewater allege Schnader Harrison failed to enter an appearance in a bankruptcy involving their former business, despite multiple notifications of claims they had as creditors, according to a complaint filed Thursday in the US District Court for the Eastern District of Pennsylvania.

The former clients also say the law firm transferred ownership of insurance policies they had with their former business to them without analyzing the financial ramifications this would have. According to lawyers representing the former clients, this has exposed the plaintiffs to millions of dollars in tax liabilities.

In their complaint against Schnader Harrison, Vederman and the two Sidewaters are represented by a team of lawyers from Spector Gadon Rosen Vinci, who are asking the court for damages and indemnification of taxes and other costs for all three.

“They just want to be made whole,” Paul Rosen, chairman of Spector Gadon, said in a phone interview Thursday.

Rosen continued: “My clients never wanted to bring a claim against Schnader Harrison, who they’ve used for more than 20 years, trusted them and believed in them. They were really shocked that this happened, surprised to learn that Schnader would not independently take care of them.”

The lawsuit comes in the months following what the complaint depicts as a frenzy within Schnader Harrison as lawyers attempted to fix what’s described in exhibits as a “debt disaster” for Vederman and the two Sidewaters.

The so-named “disaster” was precipitated by the bankruptcy of Charming Shoppes, a clothing store founded in 1940 by Steven and Samuel’s father and the uncle of Vederman, court filings said.

Schnader Harrison had represented the trio in relation to their business since the early 2000s, including the 2012 sale of the family business to Ascena Retail Group. Ascena and its 63 affiliated entities, including Charming Shoppes, went bankrupt in 2020, and the Sidewaters and Vederman were named as creditors.

As part of Ascena’s bankruptcy plan from February 2021, the Sidewaters and Vederman received notice that unless they filed a timely objection, the court would grant a motion for rejection of their insurance policies with Charming Shoppes, according to their negligence lawsuit.

Notices provided 30 days for the plaintiffs to file objections. However, Schnader Harrison lawyers never filed any objections or other responsive pleadings, allowing the court to grant the motion to reject the policies, the complaint said.

Even when there was enough time to file an objection, lawyers at Schnader Harrison allegedly transferred ownership of the life insurance policies to the clients without performing any due diligence about the financial implications of the ownership transfer, the complaint adds.

But this misunderstanding proved to be much to the advantage of the debtor, who sought to avoid paying for the policies, the plaintiffs’ lawyers said.

“Clearly, debtor’s counsel wanted to cooperate…in an attempt to avoid objections to the proposed rejections being asserted by the plaintiffs, and this action was not even questioned by Schnader,” states the complaint.

“Plaintiffs knew nothing of what was going on, except that they believed they were being properly represented by the appropriate attorneys selected by Schnader’s tax and bankruptcy departments to protect all their interests and not expose them to damages,” states the complaint.

In all, the plaintiffs alleged breach of contract, professional negligence, breach of fiduciary duty, tortious interference with contractual relations, declaratory and injunctive relief against Schnader Harrison.