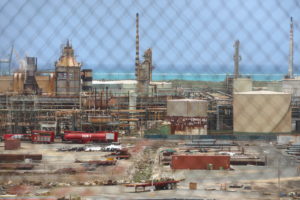 The west end of the Limetree Bay Refinery overlooks an aquamarine sea on May 25th. It was built by Leon Hess in the 1960s and was once the largest in the world, with a capacity of 600,000 barrels per day. Later, when Hovensa, a joint venture between Hess Corporation and Petroleos de Venezuela, the refinery had a history of environmental problems and polluted the island’s only aquifer. Stepping back from an agreement to invest $ 700 million in new environmental protection measures, Hovensa declared bankruptcy and closed the plant in 2012, where it was rusted from salt and left unused for almost 10 years. Since the re-commissioning in February under new owners, only the eastern part has been in operation, while the western part is harvested for scrap. Limetree is currently under a 60-day shutdown order from the U.S. Environmental Protection Agency due to operational and equipment accidents. (Patricia Born’s photo)

A National Guard and mothers with newborn children are among 22 named plaintiffs in a new class action lawsuit against Limetree Bay; the fourth has been filed against the refinery since a flaring incident on Dec.

The plaintiffs are demanding compensation for property damage and medical surveillance so that secondary diseases caused by pollutants in the refinery can be diagnosed and treated quickly.

Unlike the previous lawsuits filed in the Territory’s courts, the June 7th lawsuit was filed in the U.S. District Court for the Virgin Islands because most of the lawyers are based in the mainland. These include The Lambert Firm and Fishman Haygood, environmental law firms with refining experience in New Orleans, and St. Thomas attorney Jennifer Jones.

National Guard Carlos Christian was one of the first Hazmat responders to arrive when a flare up incident at the Limetree Bay Refinery spilled oil on downwind houses for miles – including his home in Frederiksted. Christian claims he was told Limetree would clean his property, but no one did.

“This case is very interesting because of the impact it has on the island’s ecosystem,” said lawyer Hugh Lambert. “Here you have a refinery, Hovensa, that contaminated the aquifer and maneuvered it into bankruptcy to shirk responsibility, which was then recreated by a hedge fund with loose environmental review by the previous government’s EPA. They got the facility up and running without doing the minimal work a refinery had required for over nine years, and now the downwind community is suffering. “

The St. Croix aquifer was polluted by petroleum hydrocarbons from 300,000 barrels of petrochemicals when Hovensa owned the refinery. According to a status report from the U.S. Environmental Protection Agency, only a small percentage of the oil released today, about 306,000 gallons, needs to be extracted from the groundwater under the refinery. A $ 75 million environmental trust fund was set up as part of Hovensa’s bankruptcy settlement following the refinery shutdown.

Still, the Crucians today rely on cisterns for their drinking water, and the May 12 oil mist polluted countless numbers and showered gardens, roofs, and cars.

Residents have been offered money to pay for the cleanup themselves if they make claims for bodily harm and damages, according to the complaint and documents submitted to the source.

Among the listed defendants were 100 “John Does” whose identities will be one of the attorneys’ first challenges due to the confused and unclear number of investors behind Limetree’s limited liability companies.

Limetree Bay Ventures, the originally operating LLC, was recently dissolved and revived as Limetree Bay Energy, LLC, according to Limetree spokeswoman Erica Parsons. Arclight Capital, which initially held an 80 percent majority stake, began mining its ownership of the refinery last year and sold its remaining stake in April, according to a Reuters source familiar with the situation. And Freepoint Commodities, which previously held a 20 percent stake, no longer holds a stake in Limetree, another knowledgeable source said.

How are those responsible for the refinery accidents in the four months from February 1st to the present day identified? For example, Freepoint has invested in Limetree Bay Terminals.

“We need to subpoena the information. It means breaking through the corporate veil, ”said Lambert. “If the terminal gets its product from the refinery next door, for example, they are an integral part and we have to develop the factual truth of their interdependence.”

A majority of the plaintiffs in the new case claim they have pre-existing respiratory diseases made worse by successive releases of hydrogen sulfide. Limetree has rejected these publications, but EPA documents support them. Two of the plaintiffs are mothers with newborn babies. A plaintiff is said to have been hospitalized for a week.

“This is not the first time the Defendant Arclight has targeted and exploited endangered color communities,” the complaint reads, citing millions of dollars the company has suffered from environmental fines, with minorities accounting for 35 percent of those affected.

It is alleged that Arclight “hunts paint communities where environmental laws are not enforced … on the assumption that these vulnerable communities lack the resources to recourse for the damage caused by the exploitation of Arclight”.

A Limetree spokeswoman has not returned a request for comment at the time of publication.