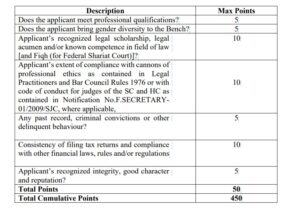 The Women in Law Initiative Pakistan issued a press release and an alternative proposal to reform the appointment of judges. The following is an abbreviated version of their full proposal.

The Women in Law Initiative Pakistan welcomes the appointment of the first female judge to the Pakistani Supreme Court and hopes that the Pakistani Judicial Commission (JCP) approves her appointment at its meeting on the 6th, with many more to come, towards a more inclusive one and gender equitable top-level justice.

Many legitimate concerns about a lack of transparency and gender diversity were raised during this process, which sparked a critical debate on broader issues related to reforming the judges’ appointment process. As attorneys, currently barely represented in the bar and bar associations, we have endeavored to make our voices heard and to participate meaningfully in this momentous debate.

We see Judge Ayesha Malik’s recognition by the JCP as an encouraging sign, but we are aware that efforts to achieve holistic reforms in the direction of transparency and representation do not end here, but begin here. Addressing the larger problems related to the lack of representation of women in the higher judiciary needs to continue.

With this in mind, the Women in Law Initiative Pakistan has proposed alternative principles and procedures for the appointment of judges.

The main features of our proposal are:

We firmly believe that reforms, the selection criteria on the basis of rigid formalities (e.g. many years of practice, number of cases, etc.) care obligations and professional success. Such criteria are neither a healthy reform for the judicial institutions nor for Pakistan and would exacerbate existing inequalities.

Globally, we have seen a move towards active engagement by Judicial Appointments Commissions in the UK, South Africa, Canada and other countries towards a publicly declared process, application-based model and a stated commitment to diversity and inclusion. Our constitutional articles 25 and 34 also call on the state, whose judiciary is a pillar, to guarantee the participation of women in national life if necessary through positive action.

Recognizing the need to reform the existing arbitrary and opaque procedure for the appointment and appointment of judges;

Recognizing the need to restore the confidence of members of the bar and the general public in the judiciary and its appointment process;

Recognizing the need for positive action for representation as a step in restoring that confidence;

Noting that women are severely underrepresented in the legal profession and face systemic challenges such as harassment, discriminatory practices, inherent prejudice and other inappropriative work regulations in relation to their advancement in law;

Concerned that in its 74 years of independence there has been no judge at the Pakistani Supreme Court and no representation of women on the Pakistani Bar Council;

Emphasizing that women make up only about 5.3% of senior high court judges and only 2% are women in provincial bar associations;

Further noting that the Legal Practitioner’s and Bar Council Act 1973 does not ensure discrimination against the “admission” of women based on their sex, but does not contain explicit provisions to ensure a gender equitable composition of the professional regulator that is currently inadequate for women and theirs Reflect or represent voices in the legal profession;

So now propose the following principles for the appointment and procedure of judges:

There should be an open and publicly announced process for inviting applications for current or upcoming positions in the judiciary;

The following preliminary checklist will be adopted by the designated staff for any application received for a vacancy before it can be considered by members of the JCP:

Each application should be awarded individually by each member of the JCP from a total of 50 points, which are divided as follows:

Ensuring a diverse and qualified pipeline of candidate candidates is an on-going process, so concerted and active efforts to contact, train and develop potential candidates should at all times be part of the process and responsibility of the Justice Commission of Pakistan.

Standing Committee on Diversity and Inclusion

A Standing Committee on Diversity and Inclusion should be established to work with the Justice Commission of Pakistan to improve inequality, design, develop or implement initiatives, monitor and evaluate the pipeline of eligible candidates for recruitment in the higher levels to improve justice;