Judicial Appointments: The Bar Is Losing The Plot – The Friday Times 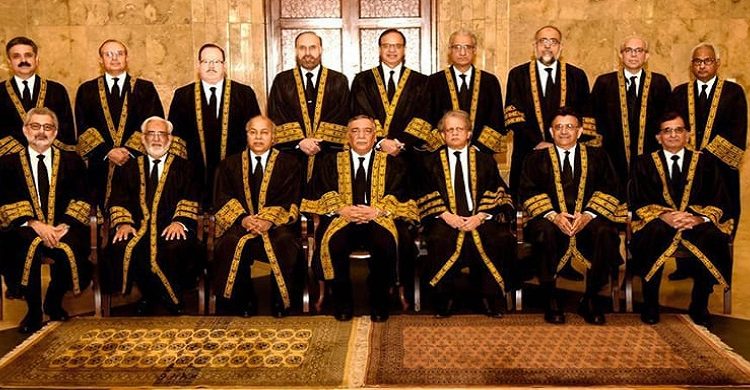 In the last few months the demands of the legal profession to develop “clear criteria” for the appointment of judges have intensified. These demands have emerged amid concerns that under the existing constitution and laws, the power to submit nominations for such appointments is the prerogative of the Chief Justice and that there is no clarity as to the reasons why the Chief Justice is the names of potential individuals can propose candidates.

The arbitrariness and lack of transparency embedded in the system, they argue, is prone to abuse and raises concerns about favoritism and cherry-picking, which ultimately leads to the composition of a supreme court that is self-interested, they say, as opposed to genuinely more independent ones Representation and impartiality, which should be the hallmarks of the judiciary as an institution.

While it is a legitimate concern that there should be a publicly stated, open and transparent process for judicial nominations, the bar simply loses the thread when it comes to the solutions they propose.

As opposed to the arbitrary power to initiate nominations, they insist that the Chief Justice (CJ) be deprived of his power to initiate nominations and be required to use the seniority lens to dispassionately and automatically the name of the senior judge for to propose the vacancy questionable. They propose this as a “provisional measure” until “clear, transparent and objective criteria” are formulated so that there is a method of certainty rather than arbitrary discretion in the appointment. But when asked: “What if two candidates have the same seniority with only one vacancy?” they have no answer.

There has been much discussion about the effectiveness of the insistence on seniority as a provisional measure that is neither a legal nor a constitutional requirement nor a practice. Once firmly established, there is a risk that new rights will be created for most judges that do not currently exist. Once created, it would be a stretch to take it back. I say this because senior judges have been made to feel that they have been “circumvented” or that one of their rights has been “violated” at a time when such a right did not exist, which has led to so much turmoil and fear against judges, who may not have been the longest serving, but have been appointed instead. If the Bar Association can lend a hand in the imposition of seniority even though such a requirement does not exist on paper, all you can imagine is what it would do if that inexplicable requirement were actually accepted as a method, tentative or not.

So while we continue to question the bizarre and frankly very unhelpful requirement to concentrate on seniority, which ensures certainty but certainly does not guarantee representation, we must also ask ourselves whether a “clear and objective criterion” really is the desired representation Would it achieve or would it end up solidifying the status quo?

This is an aspect that not much has been said about, and so I want to emphasize here that pre-defined criteria are not always the super solution it is presented as. Several policy-oriented preliminary questions have to be answered before criteria are defined that allow scope for intervention and a structure for the use and exercise of power. For example, a political decision must first be made as to which fundamental aim and purpose of the criteria should be pursued. What is it supposed to achieve? There can be two answers to this: Either it is intended to reduce the scope for arbitrary and individual preferences, or it could be anchored in a political commitment to promote diversity and inclusion.

In practice, women are often discouraged from appearing in court, even if they are doing all the work on a case in the background, because this is not a “suitable environment for women”. If they do not appear, their presence will not be marked.

A CJ’s arbitrary powers are merely to initiate the nominations. However, approval of this nomination is based on a vote by the members of the Judicial Commission of Pakistan (JCP) represented by the judiciary, the executive branch and the bar association. Thus the powers are not as free as they are presented. If the candidate proposed by CJ does not get a majority of the votes, he will not get through. In this way we see that there are some checks and balances within the existing voting-based system itself.

In addition, it is important to understand that too much rigidity and too much regulation are not always a desirable outcome. Years of experience in the way the common law was originally set up and had to evolve in the face of challenges posed by rigidity that did not allow it to consider new cases or leave defined parameters led to the development of equity as a complementary set of Rules that would achieve fairness and justice that otherwise rigid common law would not. In 1966, the top courts in Great Britain also had to establish a practice line on their rigid system of precedent, allowing previous decisions to be reversed if they had outlived their role in ever-evolving social advancement.

Therefore, in many cases the role of discretion is desired instead of strict management so that a fair result and appropriate action can be achieved in individual cases. For example, an offense can result in both severe and minor penalties, but it is at the discretion of the judge to decide which penalty should actually be imposed in a particular case. This is not to say that such powers should not be abused or not structured. Indeed, all discretion must be exercised within the parameters of the Constitution. However, it suggests that discretion in and of itself may not be bad, but may even be desirable. The real challenge, of course, is to find a balance that can give structure without introducing the risk of rigidity.

What the basic “purpose” of the criteria for the appointment of judges really would be, therefore, is of crucial importance before the “criteria” themselves can be considered. If the whole focus is on anchoring seniority as the main aspect, then we should be able to see that this is nothing more than gatekeeping to maintain the status quo of male dominance in these institutions. In such a case, no real challenge to the system is intended, but the reform slogan is instigated in order to cement existing power dynamics in the system. This can prove to be more exclusive than inclusive, especially if it introduces additional technical barriers in the name of “clear criteria”.

For example, the introduction of rigid technical details such as “decades of practice”, “number of cases” etc. can keep the status quo up and serve as another tool to monitor the exclusive clubs these institutions currently are and the prospects for appeal especially by women, as they do not take into account the cyclical nature of their careers, the systemic exclusion from active legal practice, the navigation of care duties and professional achievements.

In practice, women are often discouraged from appearing in court, even if they are doing all the work on a case in the background, because this is not a “suitable environment for women”. If they do not appear, their presence will not be marked. Even if they do appear, the reader may not notice their presence and only mention the name of the male colleague with them. This affects their chances of showing the required number of cases in which they have occurred, which directly affects their suitability on paper to meet technical requirements like number of cases, number of judgments reported, etc. even though they are in the Reality may have worked for many more. The technical system is first manipulated against the women.

Therefore, the introduction of technical aspects can sometimes further solidify existing inequalities and push back the already marginalized classes even further. Such criteria are neither a healthy reform for the judicial institutions nor for Pakistan and would exacerbate existing inequalities. In our pursuit of transparency, we must not lead us to support measures that perpetuate the status quo and reinforce the invisible and structural barriers that have prevented women and other under-represented groups from eligibility and access to these forums.

The focus on professional qualifications for suitability in the judicial sector is inherited from our colonial past. Even the UK has moved from a strict insistence on eligibility based solely on technical and professional qualifications to a more holistic and inclusive view. They now count diversity as a component of earnings and require a publicly declared commitment to diversity and inclusion. If you approach reform from the perspective of diversity and inclusion, instead of restricting the CJ in its arbitrary exercise of power, then you are not only fixated on cementing seniors in the profession, but are open to a paradigm shift towards rethinking the entire process in such a way that more people can come forward and be involved.

For this reason, criteria alone are not sufficient to solve the problem of representation in the judiciary, for which a lack of transparency is a symptomatic problem. Any quick fixes for the sake of transparency that ignore the more relevant issue of representation will make matters worse for those who are underrepresented. “Seniority” itself is such a gatekeeping tactic that makes the process more transparent and safer, but does nothing to promote diversity and inclusion. Transparency, rooted in the consolidation of seniority, is therefore not a desirable solution. Instead, there should be a paradigm shift from a nomination-based to an application-based model, in which applications for vacancies in the higher justice system are drawn from a wider range of applicants, along with the declared commitment to diversity and inclusion under Articles 25 and 34 of the Constitution. The JCP may consider any full application received within a set time limit and record points related to legal knowledge, skills, reputation, ethics, code of conduct, tax and / or other law compliance. The Women in Law Initiative has made detailed recommendations in this regard that should be considered and incorporated by all stakeholders.