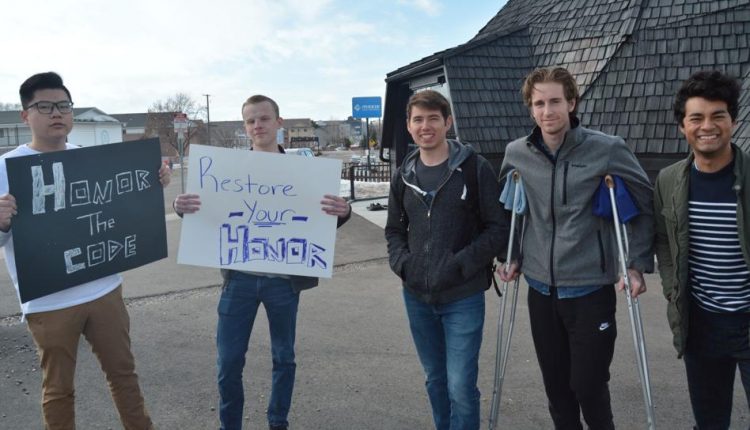 A class action lawsuit against two former students at Brigham Young University-Idaho was filed against the US Department of Education on Wednesday over the students’ Title IX rights.

There are 33 plaintiffs, LGBTQ students from 25 religious colleges, in the lawsuit. Paul Southwick, an attorney in Portland, Oregon, is representing plaintiffs, who claim they have been discriminated against by their higher education institutions.

“Unfortunately, as society has gained a lot more acceptance and the law offers a lot more protection, many religious colleges have often not and either stagnated or actually made it difficult for LGBTQ students on campus,” Southwick said.

Title IX is a federal civil rights law that was passed as part of the Education Changes of 1972. This law protects people from gender discrimination in educational programs or activities that receive federal funding.

The Ministry of Education grants an exemption from Title IX to private religious universities. The lawsuit argues that this is unconstitutional as the government provides public taxpayers’ money to these institutions.

“If the government provides public funds to private actors, such as the colleges and universities represented by the plaintiffs, the constitution prevents the government from allowing such private actors to use those funds to harm disadvantaged people,” it said Legal action. “This constitutional principle remains true even when private actors act on sincere religious beliefs, and it remains true whether the people they harm are racial or ethnic minorities, sexual or gender minorities, or those who have multiple overlapping identities reflect.”

One of the plaintiffs, Chandler Horning, graduated from BYU-Idaho in April 2020. He told Standard Journal that he had spent two semesters on campus because he had previously taken classes online. These two semesters felt like a lifetime for him.

Horning said he experienced anxiety, depression, stress, and anxiety every day while on campus. He had come out earlier as gay, but put himself back in the closet on campus.

A March 2021 report published by the Religious Exemption Accountability Project and College Pulse concluded that sexual and gender minority students enrolled in Christian colleges and universities experience more harm, isolation, and less inclusion on their campus and have different mental health outcomes and college experiences than heterosexual students.

According to the lawsuit, BYU-Idaho has a page on its counseling center that specifically discusses same-sex attraction: “Unfortunately, same-sex people can experience anxiety, depression, social difficulties, feelings of isolation, and even thoughts of suicide.” The resources on this page only lead to LDS approved materials.

Horning said these feelings often result from the social environment LGBTQ students find themselves in. Acting out his sexuality could have resulted in his being evicted and evicted from BYU Idaho homes.

“You can be gay and go to BYU-Idaho. This is not a problem. It’s dating and all the homosexual you do in your actions that would kick you out, ”he said. “It’s a snitch culture, literally, your friends are the police, your classmates are the police.”

Horning’s upbringing in the LDS Church as a child and teenager led him to date women even though he knew he was attracted to men, he said. He was closed off and not ready to see what would happen when he got out at 17.

“I did what every Mormon child does and applied to a church school,” he said.

Another plaintiff, Rachel Moulton, was a BYU-Idaho student who left university in late 2020 to protect her sanity after learning that “BYU’s toxicity was not limited to personal learning.”

“They compared LGBTQ + people who just wanted the right to marry the person they love with agents of Satan attacking the family,” Moulton said in the lawsuit.

Moulton’s complaint in the lawsuit states that the university taught her and other LGBT women that they might be happy to marry a man despite “struggling with same-sex attraction.” LGBTQ students are also taught that according to legal proceedings in the afterlife, they would no longer have same-sex attraction.

This resulted in Moulton feeling suicidal because she “would do anything not to be gay,” even if it meant ending her own life, the lawsuit says. Moulton attempted suicide in the middle of her freshman semester at BYU Idaho.

Moulton is now in therapy trying to balance being gay and LDS membership.

“I know I am a child of God,” she said. “I now know that it can be true to be gay and to be a child of God. This acceptance of myself has healed me from many of the religious trauma I have experienced earlier in my life. “

Southwick said stories like Horning and Moulton’s are important, but they’re one of many LGBTQ students experience in religious universities. Since the case was filed, more than 30 people have asked to be part of the lawsuit and Southwick expects more, he said.

BYU Idaho students have formed an unofficial LGBTQ support group but are not allowed to meet on campus, the lawsuit said.

“They wish there was another way out, but unfortunately not,” said Horning.

Many LGBTQ students are trying to move out of their religious institutions, Southwick said. Horning tried this in his senior year but couldn’t.

Horning said he was relieved after graduating because he knew he could let go of worries about other people’s thoughts on campus or worries about someone who went to the university’s honorary office to get their ID removed.

“I don’t want anyone to go through what I went through while they’re trapped in a school because they can’t get out,” Horning said.