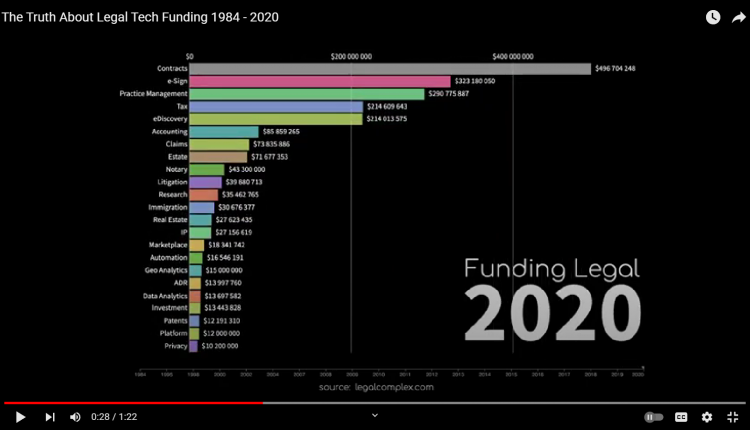 As legal technology has grown in popularity and prominence in recent years, great attention is being paid to investment activity. Which is the latest company to raise funds? How much was the raise. Who were the investors behind it?

But the true history of investments in legal technology extends back some four decades and encompasses an array of products far more diverse than one might pick up from current coverage.

Through his company Legalcomplex.com, Raymond Blijd makes it his day job to track investments and market data. To date, he has tracked nearly 30,000 deals involving nearly 20,000 companies valued at nearly $1.7 trillion.

With the goal of developing a more accurate and comprehensive overview of legal tech funding, he pulled the data from what was possibly the first recorded investment in legal tech — Adobe’s raise of $2.5 million in 1984 — and followed it through by sector to 2020.

He then assembled all the data to create the bar chart race you see in the video timeline embedded here, which he shared exclusively with LawSites. Take a moment to watch the short video, and then I’ll offer some further notes and thoughts below.

(Note also that the second half of the video analyzes invests in GRC companies and products.)

The data reveals that, from 1984 to 2020, legal tech funding totaled $12.3 billion, with the contracts sector seeing the greatest amount of investment, a total of $2.8 billion.

Other categories that led to overall investment dollars:

One big question about an analysis such as this is that of what exactly constitutes a legal tech company. Adobe, for example, has products that are widely used across virtually ever sector. But, as Blijd points out, its PDF software makes it one of the biggest players in legal tech.

Some other observations from Blijd:

If you are interested in going deeper into this data or getting the full breakdown, Blijd can oblige — for a fee, of course.

His Spark Max custom dashboards provide continually updated insights with numbers and names, and they show narratives in graphs, charts, and maps.

“If they ask us for the full breakdown, the data is theirs in seconds,” he says.