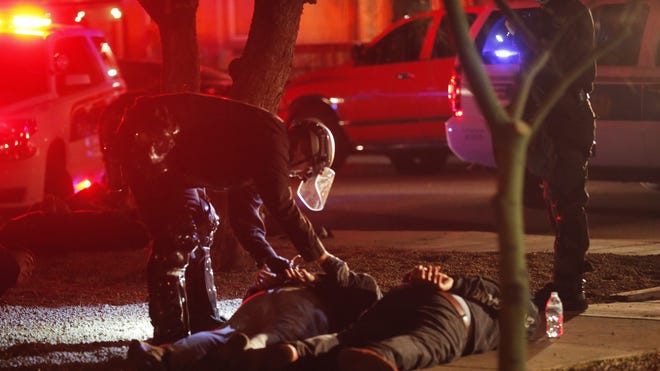 The People’s Chancellery filed a class action lawsuit against Phoenix for 124 protest arrests in May 2020.

The lawsuit comes after judges in Phoenix dismissed cases against hundreds of detained protesters. They found no credibility in the arrests, as the likely explanations of the cause or reasons for the arrests had been “copied and pasted” for all 124 people arrested on May 30, 2020.

The lawsuit alleges, among other things, gross negligence, indiscriminate use of force and violation of the rights of the First and Fourth Amendment after the police arrested people for no reason.

One of the organizers arrested on May 30 was Maxima Guerrero Sanchez. The recipient of the postponed action for child arrivals spoke of being handed over to immigration and customs after she was released.

She explained that she and others were chained at the wrists, waist and ankles – “the chains dug in my heels,” she said – taken to ICE custody and then told they would be taken to the Eloy Detention Center.

“These are examples of what the police department is doing and what they are doing for no likely reason,” she said.

Her story represented one of 23 similar arrest stories filed in the lawsuit.

In a resolute voice, Mimi Arrayaa, Co-Director of Black Lives Matter Phoenix Metro, explained the context of the lawsuit.

“Tuesday marked the year-long anniversary of the murders of Dion Johnson and George Floyd by the violent system we call the police,” she said. “A year since parishioners in one of the world’s largest civil rights movements have been seen marching the streets to demand justice for the black life taken too soon by the state.

“One year and we still have people suffering trumped-up charges because the Phoenix police force reacts to people who say black lives matter.”

She was also out to protest the night of the arrests.

“I was chased into the street like an animal and pelted with pepperballs by police officers because they said my black life is important and that’s how I act,” she said.

Billy Murphy Jr. of Murphy, Falcon & Murphy, the law firm that represented the Freddy Gray family against Boston police officers involved in his death in 2015, joined The People’s Law Counsel as an attorney on the lawsuit.

Murphy Jr. said they were impressed with The People’s Law Firm and the “extraordinary young black and Latin American leaders” in Phoenix, but it was the police’s “ugly” and “brazen” actions that caught the firm’s attention would have.

“To accuse people who have not committed a crime falsely indicting them is an abomination,” he said. “To plan to arrest the demonstration leaders before they have done anything wrong shows a level of bias and audacity that is hard to beat.”

The lawsuit describes a history of violence used by police against protesters from 2010 to 2020, including the use of pepper spray, pepperballs, tear gas and other “projectiles” alleging these acts would have the First Amendment rights of the people abused and injured.

“They have a regime here that has always been and wants to stay that way. And there is a new generation of young people who don’t let that happen,” Murphy said.

The lawsuit alleges that this repetitive behavior by the police shows that the officers were aware of their actions and were motivated to silence the protesters on the night of the arrests.

The company is seeking financial compensation for the plaintiffs and wants to prevent the city from repeating similar acts through an injunction.

Murphy explained the power class actions that such give to the community.