Welcome to Tuesday, August 10th, Brew. This is what awaits you at the start of the day:

President Joe Biden (D) has appointed eight federal Article III judges through August 1 of his first year in office. This is the largest number of Article III judge appointments at this point in the first presidential term since President Richard Nixon (R).

The Senate has confirmed three judges nominated by Biden at the Court of Appeal and the District Court. It had confirmed five of President Donald Trump’s (R) appointments at the time of his tenure. The presidents have appointed an average of three judges by August 1st of their first year in office.

The President appoints and the Senate must approve all federal judges under Article III. These include Supreme Court justices, U.S. appeals courts, U.S. district courts, and the International Commercial Court.

Biden’s first successful federal judge appointment was Julien Neals in the US District Court for the New Jersey District on June 8. On March 30, Biden announced the first appointments of his presidency to the federal court.

Presidents Bill Clinton (D) and Barack Obama (D) had their first appointment as judge until August of their first term, and both were before the Supreme Court. The Senate confirmed Sonia Sotomayor on August 6, 2009, after Obama nominated her on June 1 of the same year. The Senate upheld Ruth Bader Ginsburg on August 3, 1993 after Clinton nominated her on June 22. Neither Obama nor Clinton appointed appellate or district judges until September of their freshman year.

There are currently 80 vacancies in the federal judiciary under Article III. Biden has 24 outstanding nominations for these positions before the U.S. Senate. 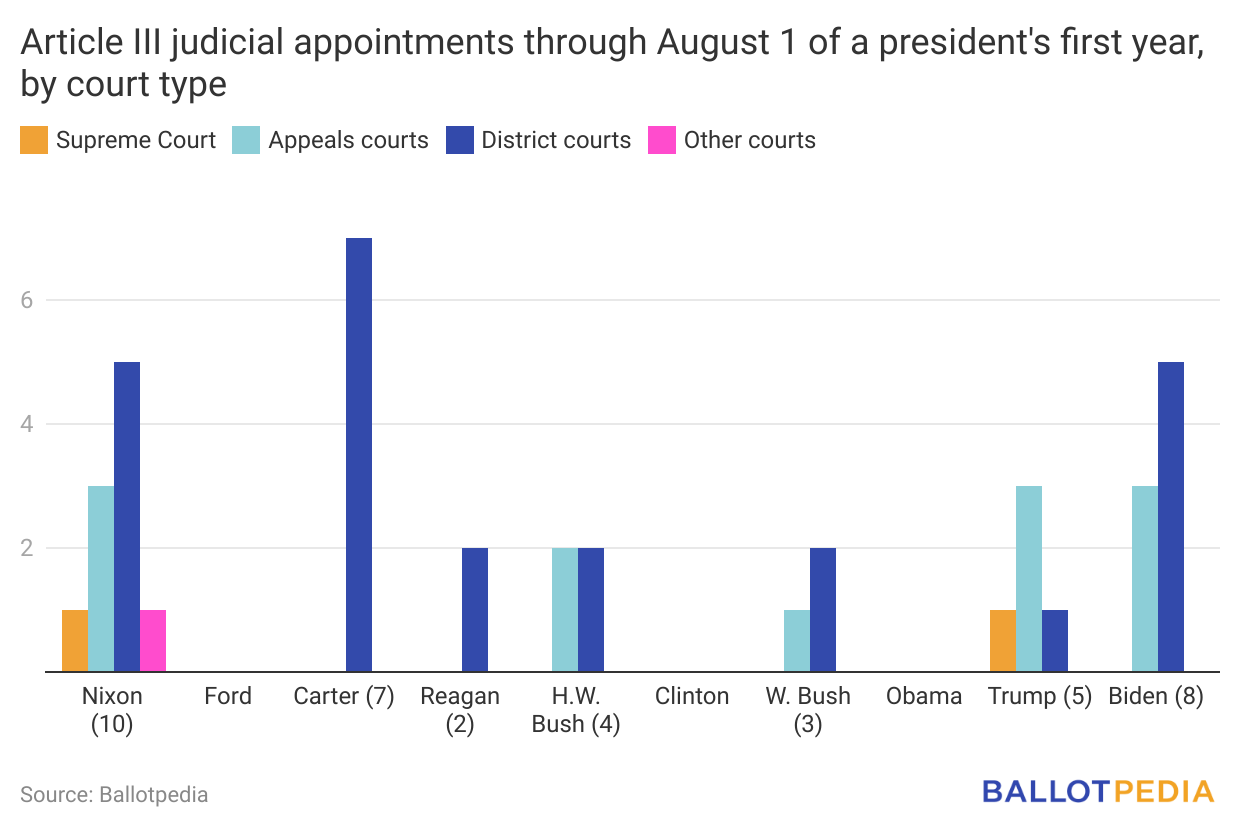 Texas House is not quorate as the second special session begins

The Texas House of Representatives launched a new 30-day special legislative session on Saturday, August 7th, with no minimum number of members required to conduct official business known as a quorum. The house has not had a quorum since July 12th.

According to CBS News, Texas-returned State Rep. Eddie Lucio, D, said he expected enough members of the Democratic caucus to return to Austin within a week to restore quorum while at least 26 of the 50 Democrats who quit in July gave issued a statement saying they would stay in Washington, DC

Here is a brief timeline of what happened to this story to catch up with you:

Texas House rules require two-thirds of the 150 MPs – 100 members – to be in attendance to establish a quorum, or the minimum number of members required to conduct official business. According to the rules: “As long as the name call is not present, no business may be carried out until the quorum is reached, unless the presence of absent members is forced or postponed.

Louisiana Governor John Bel Edwards (D) signed an executive order on Aug. 2 reinstating the state’s internal mask requirement for vaccinated and unvaccinated individuals. Louisiana is the only state to date to reintroduce a nationwide face-covering ordinance after such an ordinance was phased out.

Edwards said the order would expire on September 1 and could be extended beyond that date. The request came after the Centers for Disease Control and Prevention (CDC) updated their masking guidelines and recommended that fully vaccinated individuals wear masks indoors in parts of the country with significant or high transmission.

Nevada’s Governor Steve Sisolak (D) announced a mask mandate in counties with “significant or high transmission” of COVID-19 on July 27. In these counties, vaccinated and unvaccinated people would also have to wear masks indoors due to the new guidelines of the CDC.

39 states imposed national mask requirements during the coronavirus pandemic. 32 states – 16 with Republican governors and 16 with Democratic governors – have phased out statewide orders. 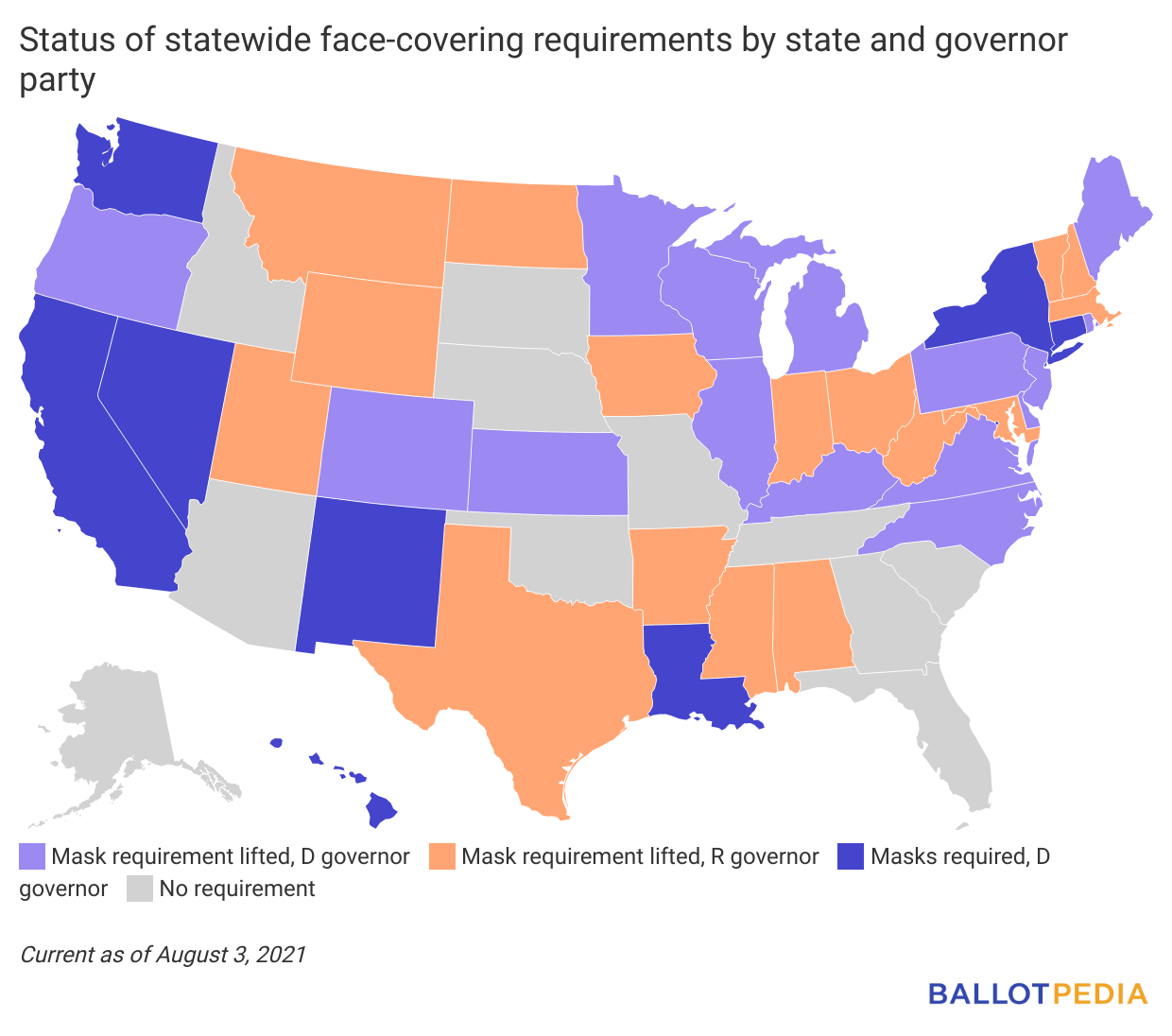 A Quarter of US Hospitals, and Counting, Demand Workers Get Vaccinated. But Not Here.