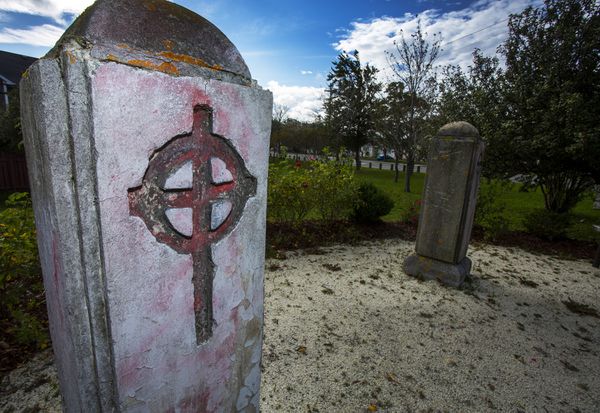 The original gates of the Mount Cashel Orphanage, in St. John’s, in 2020.Paul Daly/for the Globe and Mail

A certification hearing begins on Monday for a proposed class-action lawsuit alleging that teachers who were implicated in physical and sexual abuse at a notorious Newfoundland orphanage decades ago were shuffled to two Vancouver-area Catholic schools, where they continued to abuse children in their care .

In a notice of civil claim filed in February, 2021, in BC Supreme Court, Darren Liptrot alleged he endured two years of abuse – which included slapping, beating and sexual fondling – by his French and religion teacher, Edward English, at Vancouver College in the 1980s. Mr. Liptrot said he turned to substance use, and his life was “completely derailed.”

From 1973 to 1975, Mr. English was a supervisor at the Mount Cashel facility in Newfoundland and Labrador, where children accused him of abuse. In 1975, he and another Brother, Alan Ralph, confessed to police that they had abused boys in their care, but authorities shut down the investigation and covered it up until a royal commission launched in 1989 shed new light on the scandal. In 1991, Mr. English was convicted of sexual and physical abuse and sentenced to 10 years in prison.

Mr. English filed a statement of defense denying the allegations in the proposed class action.

The allegations in the lawsuit have not been tested in court.

According to the lawsuit, the Christian Brothers, which ran the orphanage, protected not the children but their abusers, by quietly transferring them out of Newfoundland to avoid criminal charges. From 1976 to 1983, the Christian Brothers moved six men from Mount Cashel to two other schools it operated, Vancouver College and St Thomas More in Burnaby; all six were later convicted of physically and/or sexually abusing children at Mount Cashel, the lawsuit said. One has also been convicted of abuse perpetrated in Vancouver.

“The abuse at Vancouver College and St. Thomas More continued a pattern of systemic child abuse at institutions run by the [Christian Brothers] first revealed at the Mount Cashel orphanage in Newfoundland in the mid- to late-1970s,” the lawsuit said.

In new affidavits filed recently with the court for the class action application, several more students recounted abuse at the BC schools. Christopher Dziekan, who attended Vancouver College from 1976 to 1984, said physical and sexual abuse, as well as voyeurism, by the Brothers caused him years of depression and panic attacks. Hamish McArthur, who attended Vancouver College from 1985 to 1987, described “regular beatings” that drove him to substance use and depression.

If the action is certified, Mr. Liptrot would be the representative plaintiff, acting on behalf of all students who attended Vancouver College and St. Thomas More between 1976 and 2013 who claim they were abused by current or former members of the Christian Brothers. The hearing is scheduled for seven days.

The suit names as defendants Mr. Edwards; Brothers Joseph Burke and Douglas Kenney; former Christian Brothers head Gerard Gabriel McHugh; and the Roman Catholic Archbishop of Vancouver (RCAV). The corporate entities that now own and operate the two Vancouver-area high schools are also being south. The Christian Brothers declared bankruptcy in 2011 and is not named as a defendant.

The Roman Catholic Episcopal Corp. of St. John’s was initially named as a defendant, but the case against the corporation has been stayed in light of bankruptcy and creditor proceedings in Newfoundland and Labrador.

The Catholic Independent Schools of Vancouver Archdiocese, which also was initially named as a defendant and removed later, denied in previous court filings the accused Christian Brothers acted under its authority or employment.

“I want to understand how Joe Burke was allowed to return to a teaching position at Vancouver College after having been convicted of a criminal offense for his actions at Mount Cashel,” the man said in his affidavit.

In a response to the notice of civil claim filed to the court, Vancouver College Ltd. denied that it is vicariously liable for any alleged acts of abuse of students at Vancouver College, including Mr. Liptrot, by current or former Christian Brothers. The school also said in a statement on its website that it would be more appropriate to respond to allegations of abuse individually, rather than as a class action.

St Thomas More Collegiate Ltd said in a filed response it was unaware of any specific instance of abuse perpetrated by a Christian Brother at the school and denied a continued pattern of systemic child abuse. In a written statement provided to The Globe and Mail on Friday, St. Thomas More Collegiate President Dianne Doyle declined to comment on a case before the courts but said the school takes abuse seriously and is committed to supporting victims.

In its response to the civil claim, the RCAV denied that the accused Christian Brothers acted under their authority or employment. It also denied that it knew, or should have known, that the Christian Brothers had faced serious allegations of abuse at Mount Cashel before they were transferred to Vancouver College and to St. Thomas More.

Mr. Kenney, who was appointed superior and superintendent at Mount Cashel in 1971, in response to the notice of civil claim denied receiving complaints about himself or other Brothers while he held that position. He also denied abusing students at Vancouver College.

The Globe could not reach the other individuals named as defendants.

In 2007, a former BC student sued Mr. English, the Christian Brothers and the Roman Catholic Archdiocese of Vancouver, alleging he was molested at a Burnaby Sunday school in 1978 and later at St. Thomas More. That case was settled out of court.

We have a weekly Western Canada newsletter written by our BC and Alberta bureau chiefs, providing a comprehensive package of the news you need to know about the region and its place in the issues facing Canada. Sign up today.