Who can judge the judges? Idaho governor to consider a bill remaking the judicial council 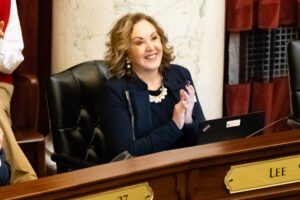 The Idaho Senate on Thursday approved a bill that, if signed into law by Idaho Gov. Brad Little, will require major changes to the composition of Idaho’s judicial council and give the governor more authority over the judicial appointment process.

The house quickly passed House Bill 782 after it was introduced last Wednesday, sending it to the Senate amid reported pressure from leadership.

The Senate on Thursday voted 26-9 to approve the bill, which now moves to the governor’s desk.

The bill also prescribes the areas of law each attorney on the council would “predominantly” practice, including civil litigation and criminal prosecution.

Proponents of the bill, including sponsor Sen. Abby Lee, R-Fruitland, say it will add transparency to the process because comments and feedback around nominees would become matters of public record.

Opponents of the bill say the changes are unnecessary when Idaho already has a process that works well and produces high-quality nominees. Attorneys and former judges from across Idaho have also expressed concerns about making comments and feedback public, saying it could have a chilling effect on honest feedback about potential appointments, especially among attorneys whose future cases may end up in front of a nominee.

Lee said on Thursday that Idaho has good judges and the bill was a policy decision, not a representation of any feelings about the independence of the state’s judiciary. Lee said the bill puts the council’s process in line with the legislative process and how vacancies are filled when a legislator resigns or otherwise leaves office. And the expansion of the council members would increase diversity of thought, she said.

“I think it’s really important that we expand that and be able to have additional perspectives when we’re dealing with such weighty matters,” Lee said. “I think by expanding the members who are on the council, we’re also going to get great ambassadors. We’re going to get people who will go out and help encourage others to submit their names for this office, and we will continue to encourage and support a great judiciary in the state of Idaho.”

GET THE MORNING HEADLINES DELIVERED TO YOUR INBOX

The bill is not the only effort underway to evaluate whether Idaho’s judiciary needs a revamp — or what that revamp should be.

The Idaho Supreme Court says it will move forward with a special committee to examine issues around the judicial recruitment process and the council itself. Spokesman Nate Poppino said applications for the committee will be open soon.

Idaho Supreme Court Chief Justice G. Richard Bevan sent a letter to Gov. Brad Little, Senate President Pro Tem Chuck Winder and Speaker of the House Scott Bedke at the end of February proposing a committee with all three branches of government to study issues of concern. Bevan cited the process that took place in the 1960s, when the judicial council was formed, saying it involved study, collaboration and public input. 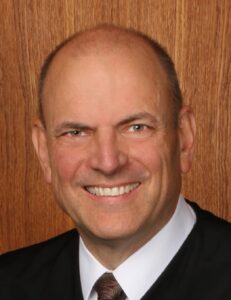 Idaho Supreme Court Chief Justice G. Richard Bevan was appointed to the court in 2017 and
assumed his leadership role on Jan. 1, 2021.

The resulting constitutional amendments and statues that created the Idaho Judicial Council were recommendations from that committee, Bevan noted.

“We want to avoid piecemeal changes, which could inadvertently create unintended consequences on our recruitment and judicial selection process,” he wrote, cautioning against rushed proposals.

Bevan met with a lobbyist in early February to discuss a previous version of the bill, House Bill 600, and did not raise many concerns, according to an email exchange provided by Poppino. Bevan again stressed the committee as the best way to find solutions and included his full letter proposing the committee. That version of the bill did not change the number of council members or the Idaho State Bar’s role in selecting the members.

‘If it’s not broke, we shouldn’t try to fix it,’ Boise senator says

During debate, Sen. Julie VanOrden, R-Pingree, said she couldn’t support the bill without more collaboration from the judiciary. Sen. Patti Anne Lodge, R-Huston, agreed, saying the judicial council has worked well for decades and she felt it was unfair that judicial salaries were included in the bill. Lodge has been married to former chief district judge Edward Lodge for more than 50 years.

“They are the third branch of government and should, at least, have the courtesy of having their salaries placed in a separate piece of legislation,” Lodge said during debate. “To tie those two together, to me, is disrespectful to our judiciary. We do have good judges in this state, and we have good judges because of this judicial council.” 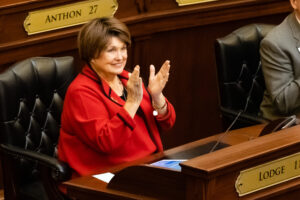 Lodge also said requirements around the type of law attorneys must practice would eliminate many attorneys who operate as general practitioners and don’t fit into specific categories.

Sen. Grant Burgoyne, D-Boise, said he was once a candidate for judicial appointment himself and thought it was a transparent process. In the end, Burgoyne said he was confident the person who was selected was well qualified.

“I think this is a situation where, if it is not broke, we should not try to fix it,” Burgoyne said. “I absolutely do think that we should study it. This law was put into effect … in 1967, and it is definitely time that we take a hard look at it, (but) I don’t think this legislation is going to improve our judiciary.”

The bill now heads to Little’s desk for a signature or veto. If he signs it, the act goes into effect on July 1, but current members of the council could finish their terms, according to the bill text. All subsequent appointments would be subject to the new requirements.