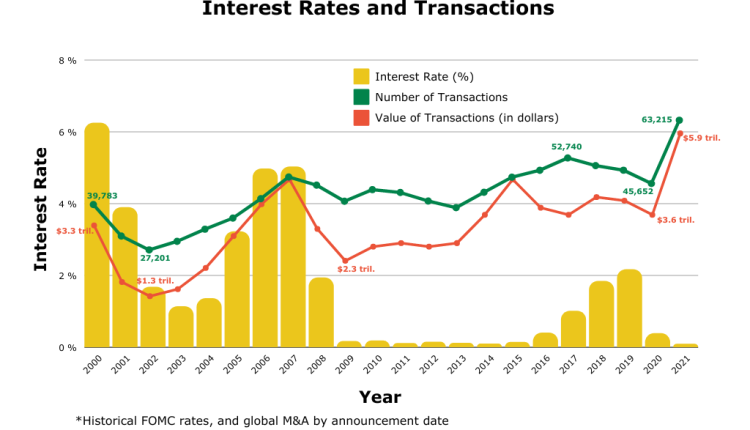 As interest rates continue to rise, the impact on asset purchases and acquisitions will be felt across the economy. From real estate to private equity, inflation-induced interest rate hikes will have numerous impacts on both deal structure and the quantity of executed transactions. What might be less clear is what this could mean for businesses – in particular, those looking to execute mergers and acquisitions (M&A) in the next 18 to 24 months.

In this article, we’ll take a closer look at how rising interest rates could impact M&A deals.

When it comes to interest rates, central banks are among the most important players. Central banks set the benchmark interest rates for their respective countries, which in turn affects a host of other economic factors. The Fed has made it abundantly clear that they intend to fight inflation heavily by increasing the federal funds rate by selling bonds.

For businesses looking to perform M&A deals, central bank policies for rising interest rates are critical to watch. If interest rates are on the rise, it could and will make borrowing money more expensive—and thus could impact the feasibility of a potential deal.

When interest rates are low, businesses can borrow money inexpensively. This can be a major advantage in M&A deals, as it can help companies and private equity investors finance larger acquisitions using leverage than they would under high-interest rate scenarios.

However, with interest rates on the rise, borrowing money is becoming increasingly expensive. This is causing businesses to be more cautious about taking on too much debt in M&A deals. Instead, they are opting for more cash and equity transactions – and less debt.

This shift towards more cash and equity deals is likely to continue in the coming months, as businesses brace themselves for even higher interest rates and likely a more difficult M&A process.

While the impact of rising interest rates on M&A deals has been largely positive so far, there have been a few negative consequences as well.

For one, rising interest rates are causing skittishness among businesses. This is leading to more paused transactions and even canceled deals.

In addition, businesses are becoming increasingly cautious about taking on too much debt in mergers and acquisitions deals, partly because banks are tightening the lending requirements on the M&A deals they underwrite.

This is causing many investors to either walk away from deals altogether or opt for adjustments to deal structure by paying for cash, or–and in most cases–opting for larger earnouts from company sellers.

But most buyers don’t want to have to put down more equity than is necessary as doing so tends to tamper cash-on-cash returns. Furthermore, sellers warry of future performance have been less inclined to accept hefty earnouts with little promise of upside.

All of this is happening as businesses brace themselves for even higher interest rates in the months ahead.

More importantly, higher rates tend to have a direct and negative palpable impact on business valuations, which in turn makes more sellers reticent to sell.

Opportunities and Benefits of Rising Interest Rates on M&A

While there are some negative consequences of rising interest rates on M&A deals, there are also a number of positives.

For one, businesses are becoming more cautious about taking on too much debt in M&A deals. This is causing them to opt for more cash and equity transactions – and less debt.

This shift towards more cash and equity deals is likely to continue in the coming months, as businesses brace themselves for even higher interest rates.

This increased caution could be a good thing, as it could lead to more sustainable M&A deals. In addition, it could lead to more rational decision-making among businesses – as they weigh the costs and benefits of any potential deal more carefully and adjust down what once were fairly happy business valuations.

Another benefit of rising interest rates is that it is making borrowing money more expensive. This could lead to businesses being more disciplined about their spending, and could help to reign in excesses in the economy.

Finally, rising interest rates could lead to a stronger economy in the long run. This is because they can help to curb inflation, which can have a negative impact on economic growth.

When interest rates are on the rise, some sellers may be tempted to shy away from executing deals. This could be due to the fact that borrowing money is becoming increasingly expensive.

However, it’s important to remember that rising interest rates should not cause sellers to shy away from executing deals. There are a number of positives to consider, including more cash and equity deals and a stronger economy in the long run.

So, while there may be some negative consequences of rising interest rates on M&A deals, there are also a number of positives. Sellers should not be discouraged from executing deals – but rather should weigh all the pros and cons before making a decision.

Business buyers and private equity investors should continue to be opportunistic in the current market, despite the rise in interest rates. The potential benefits of rising interest rates – such as more cash and equity deals – should not be overlooked.

In addition, businesses should be cautious about taking on too much debt in M&A deals. This is because banks are tightening the lending requirements on the M&A deals they underwrite.

Finally, buyers should be prepared for even higher interest rates in the months ahead. This could lead to a slowdown in deal flow, so buyers should act quickly when a good opportunity arises.

When considering mergers and acquisitions in rising interest rate environments, business sellers should keep the following in mind:

1. Sellers should weigh all the pros and cons of any potential deal carefully before making a decision.

2. Sellers should be cautious about how deals are structured, including debt-service-coverage ratios on current cash flows, particularly if their transaction has too much debt in M&A deals.

3. Sellers should be prepared for even higher interest rates in the months ahead.

4. Sellers should consider opting for more cash and equity transaction and less in the form of earnouts and debt.

5. Sellers should be opportunistic in the current market, despite the rise in interest rates.

While sellers don’t want to sell themselves short, rising rates can present their own opportunities and challenges that should be considered before consummating a transaction with any buyer.

In a worst-case scenario, a rise in interest rates could even kill a potential deal altogether. This is because the higher borrowing costs could make the deal too expensive for the acquiring company.

So far, we’ve seen that rising interest rates can have mixed effects on M&A deals. On one hand, higher borrowing costs can make deals more difficult to execute. On the other hand, a strong economy (which is often associated with rising interest rates) can lead to more favorable terms for buyers in M&A transactions.

The bottom line is that businesses need to be aware of how changing interest rates could affect their M&A plans – and stay up-to-date on central bank policies.

Nate Nead is the CEO & Managing Member of Nead, LLC, a consulting company that provides strategic advisory services across multiple disciplines including finance, marketing and software development. For over a decade Nate had provided strategic guidance on M&A, capital procurement, technology and marketing solutions for some of the most well-known online brands. He and his team advise Fortune 500 and SMB clients alike. The team is based in Seattle, Washington; El Paso, Texas and West Palm Beach, Florida.