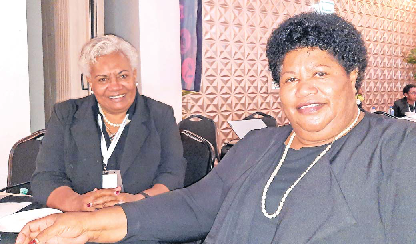 THE Fiji Law Society (FLS) is in discussions with the government on a number of issues, including the composition of the Judicial Service Commission (JSC) and the appointment of judicial officers.

FLS president Wylie Clarke said this while responding to a question during a discussion at the FLS Convention 2023 at the Pearl Resort in Pacific Harbor on Saturday.

Nausori lawyer Naomi Raikaci asked what FLS could do as a body about the insecurity of tenure of expatriate judges appointed on short-term contracts in order for Fiji to have absolute judicial independence without any interference from the other branches of government.

“We can sit here and talk, say this and say that, but the Constitution says this is the way they are going to be appointed, this is the security of their tenure, it will go on forever and ever,” she said.

“What can we do as a body to alleviate that?”.

Mr Clarke said a number of things were in motion and the society had been in talks with Attorney-General Siromi Turaga.

“We had a discussion with him on Thursday night, but these discussions are going to be on going, about important institutions,” he said. “When it comes to judicial appointments, so about the composition of the JSC, so that’s one element of that we are working with AG.”

Mr Clarke said another element was the short-term contracts of expatriate judges, which was a widely held concern in society about the perceptions of where the weaknesses of judicial independence flowed. “We understand what those concerns are and obviously the long-term solution to addressing that would be to move away from that kind of arrangement.

“That’s kind of the general outline of the plan and obviously there’s a lot of detail in this. “So that’s what the law society’s perspective, the work we think is necessary to deal precisely with that concern.”