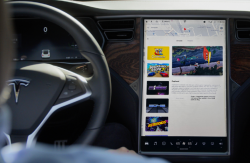 
The owner of the Tesla Model S says a yellow band has appeared around the touchscreen more than once.

July 28, 2021 – A Tesla class action lawsuit claims the touchscreens are developing yellow borders around the screens manufactured by Innolux. The lawsuit states that the touchscreen’s supposedly defective yellow stripes appear around the edge of the screen with simple, normal use.

According to the Tesla class action lawsuit, the automaker is allegedly ignoring its warranty obligations regarding the yellow edges of the touchscreen. And even if the touchscreen is replaced free of charge, Tesla will install the same Innolux touchscreens that originally turned yellow.

The plaintiff who filed the lawsuit claims Tesla owners could be forced to pay $ 2,500 for replacement touchscreens that develop yellow stripes.

The lawsuit alleges that the email did not contain a warranty document, but instead said:

“You receive the Tesla Motors Limited New Vehicle Warranty at or before the vehicle is shipped. You can also obtain a written copy of this guarantee from us on request or download it from your MyTesla account. “

The plaintiff picked up the car on December 15, 2016, but he says he never received the warranty.

Plaintiff says Tesla is making copies of its manuals and sales contracts available only through each customer’s MyTesla account.

Access to these documents is not granted prior to vehicle purchase, however, and it is Tesla’s policy “not to provide customers with warranty documents in any preserved or static form, so that they can reliably access and refer to them after purchase and over time. “

The plaintiff said he noticed the yellow border on the touchscreen in June 2018, which became thicker and darker over time.

In July 2018, he took the Tesla Model S to the service center, which kept the car for at least a week when the touchscreen was replaced. However, the plaintiff says the yellow touchscreen tape reappeared about six months later.

The Tesla class action lawsuit claims the plaintiff set up an appointment with the automaker on March 20, 2019, but Tesla canceled the appointment. The plaintiff received a text message stating that Tesla was working on a fix for the yellow edges of the touchscreen and that the fix would be released soon.

The alleged solution was for Tesla to use an ultraviolet light to “soften” the yellow stripes on the touchscreen rather than replace the touchscreens with non-defective ones.

According to the class action lawsuit, Tesla is violating its warranty by not repairing the touchscreen because “the UV treatment is actually not a permanent solution.”

The plaintiff claims that he was repeatedly told that the UV light treatment device was broken and could not be used, then the plaintiff was informed in January 2020 that the defect on the yellow border “is covered by the full four-year guarantee”. But after that, the automaker would charge $ 35 per treatment.

To date, the plaintiff’s Tesla Model S touchscreen remains unrepaired, and the Tesla touchscreen class action lawsuit alleges that the vehicles lost value due to the yellow stripes on the screens.

According to court documents, the Tesla touchscreens with yellow borders are Innolux G170J1-LE1 models that are unable to withstand normal and expected vehicle temperatures.

The plaintiff is represented by Williams & Ray, PLLC.