Sector analysis for public mergers and acquisitions in 2020

Chapter 2 of the Gilbert + Tobins 2021 Takeovers + Schemes Review (below) examines which sectors made the greatest contribution to public mergers and acquisitions in 2020.

More on this below.

The sector has been in decline since 2011 when commodity prices peaked, and 2014 was the last time the sector was led by both transaction value and activity.

Gold was the standout subsector. Nine of the 14 energy and resource transactions were for targets related to gold mining or exploration. A rise in gold prices in 2020 was undoubtedly a factor as the uncertainty of the pandemic spurred investors to move to the safe haven gold and gold assets offer, including a hedge against the prospect of future inflationary pressures.

Groceries, beverages and tobacco took second place (30%) in terms of deal value, and real estate came third (10%). However, food, beverage and tobacco activity saw a decline as only one high quality transaction was responsible for the strong performance. That was the $ 9.8 billion acquisition of Coca-Cola Amatil proposed by Coca-Cola European Partners.

In terms of the number of transactions, the financial sector made the second largest contribution to the transaction volume with 19%, followed by the professional services sector (12%).

The share of transactions in the healthcare sector, which led the way in 2019 by total transaction value, fell from 27% of total business value in 2019 to just 4% in 2020. The number of public health mergers and acquisitions also fell from six transactions in 2019 to just one in 2020 (this was EQT’s successful acquisition of Metlifecare under an agreement that came after a previous offer was withdrawn by the same acquirer who blamed the pandemic). COVID-19 has undoubtedly had a significant impact on the sector as hospitals and healthcare systems suffered the brunt of decreased patient volumes and revenues, as well as increased labor and care costs. We believe that the reduced healthcare mergers and acquisitions represent an anomaly in our data set focusing on acquisitions and programs as there have been a number of private healthcare mergers and acquisitions in the healthcare sector. We believe that general interest in this sector will remain in light of the COVID-19 pandemic, advances in healthcare and an aging population. 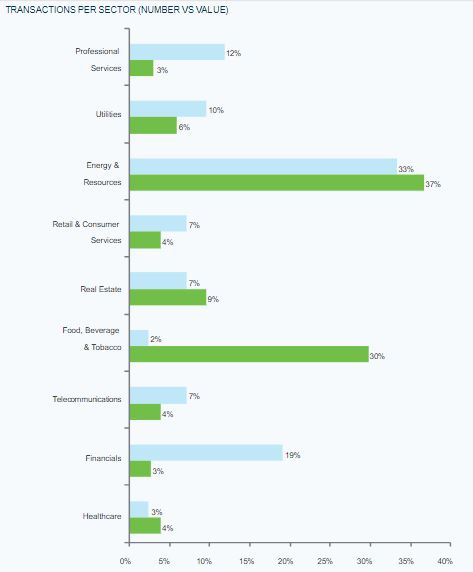 The five most valuable transactions in 2020 came from four different sectors:

Sectors of interest for foreign bidders

In 2019, there was significant foreign interest in health, retail and consumer services and industrial products. The sectors most interesting to foreign bidders in 2020 were energy and resources (seven deals) and professional services (three deals).

In terms of value, the food, beverage and tobacco sectors accounted for 44% of the total value of overseas offerings, solely due to the $ 9.8 billion acquisition of Coca-Cola Amatil proposed by Coca-Cola European Partners. It was followed by energy and resources with 23% of foreign bids based on total transaction value, with seven out of 14 deals in this sector involving foreign bidders.