Market activity for public mergers and acquisitions in 2020

Market activity in Australia remained stable in 2020 despite the COVID-19 pandemic, and the fourth quarter shows a strong upward trend

Despite the seismic financial impact of the COVID-19 pandemic, the total number of public M&A transactions in Australia in 2020 was consistent with business activity in 2019.

The outbreak of the pandemic in March 2020 clearly initially had a deterrent effect on transactions. The resulting price and asset price losses, however, opened up opportunities. As the world adapted to new norms, those with financial capacity, including private equity, and companies with strong balance sheets saw it as a time to engage in strategic acquisitions. Indeed, it seems that adversity has opened up opportunities.

The last quarter of 2020 in particular benefited from a sharp increase in M&A activity. Confidence increased significantly. M&A grows from a fruitful combination of companies that have been successfully adapted to remote work, cheap debt financing, rally in financial markets, and the development and launch of multiple vaccines. These ingredients and confidence will continue through 2021, which is expected to lead to increased business activity later this year.

Mergers and acquisitions are about numbers

The number of announced transactions valued at over $ 500 million rose slightly from 11 in 2019 to 12 in 2020. However, that number is also significantly lower than in 2018 when there were 21 high-value transactions (an eight-year high ). There were 30 transactions between $ 50 million and $ 500 million in 2020, which was in line with the previous year.

The total transaction value rose significantly in 2020 as approximately $ 32.8 billion in transactions were announced, up 37% from 2019. 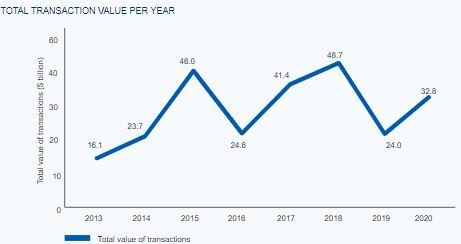 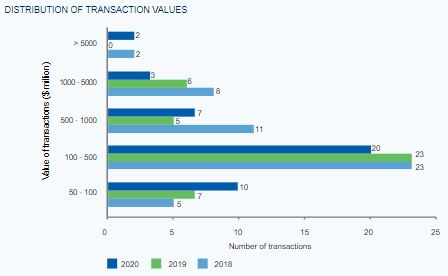 Four of the five $ 1 billion deals involved a foreign bidder.

This continues the trend from 2019 that foreign bidders are key players in public M&A deals with the highest value.

Overall, however, the share of foreign offers was lower in 2020 compared to 2019 and 2018, which is probably due to the following:

Private equity firms continued to be key players in public M&A deals in 2020. However, the total value of public M&A transactions in the Australian market involving this type of acquirer has decreased significantly.

Private equity firms were interested in a variety of sectors including real estate, finance and utilities, with each of these sectors accounting for 20% of the number of private equity deals.

In terms of raw stats, private equity interest in the healthcare sector appeared to have dropped significantly from 57% of the value of total private equity investments in 2019 to 21% in 2020. However, we consider this to be an anomaly in our dataset that focuses on mergers and acquisitions involving ASX-listed companies as private equity clearly sees opportunities in the healthcare sector. Apart from the takeover of Metlifecare by EQT, the private equity activity in this sector is enhanced by the acquisition of the NZX-listed dental group Abano Healthcare by BGH Capital and the medical center business of the ASX-listed Healius, the takeover of Advanced Personnel Management by Madison Dearborn and the acquisition of Crescent Capital by Madison Dearborn evidenced by PRP Diagnostic Imaging.

Real estate saw the highest spending by private equity firms. 49% of total investment was in this sector, which was largely dominated by ARA Asset Management’s prorated takeover bid of $ 2.4 billion for Cromwell Property Group. 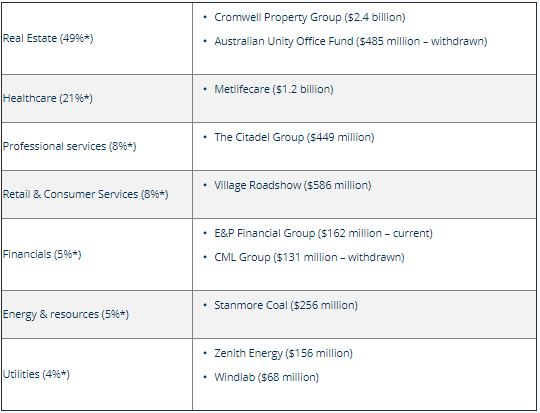 * Percentage of PE investments across all PE deals by value

Further developments that were published in early 2021 were:

As the mandatory superannuation system in Australia continues to drive the growth of the capital of Australian superannuation funds, these types of investors will no doubt increasingly be drawn into public mergers and acquisitions when attempting to invest that money. Indeed, the greater investment needs of Australian pension funds will lead to larger investment sizes that will inevitably lead them to publicly traded markets.

There was a significant drop in transaction volume at the beginning of the second quarter of 2020 as the effects of the COVID-19 pandemic were felt in Australia. Only two deals were announced in April and May: 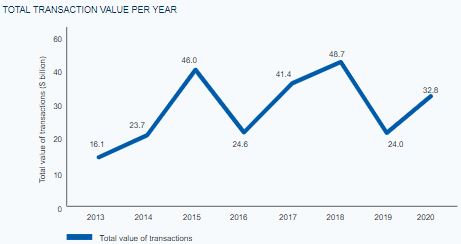 Business picked up after the first wave of the pandemic in Australia subsided, particularly in June when eight transactions were announced (most in each month of the year).

In fact, the number of deals announced rose from quarter to quarter from seven in the first quarter. 10 in Q2; 11 in Q3 through 14 in Q4, reflecting increased confidence and business activity. M&A is clearly on the rise, with a number of potential multi-billion dollar deals announced by Bingo Industries, Vocus, Tilt Renewables and Tabcorp in the first six weeks of 2021.

Public Merger and Acquisition Highlights in 2020

What’s next after the dismissal of COVID-19 class-action lawsuit against SCSO? – FOX13 News Memphis