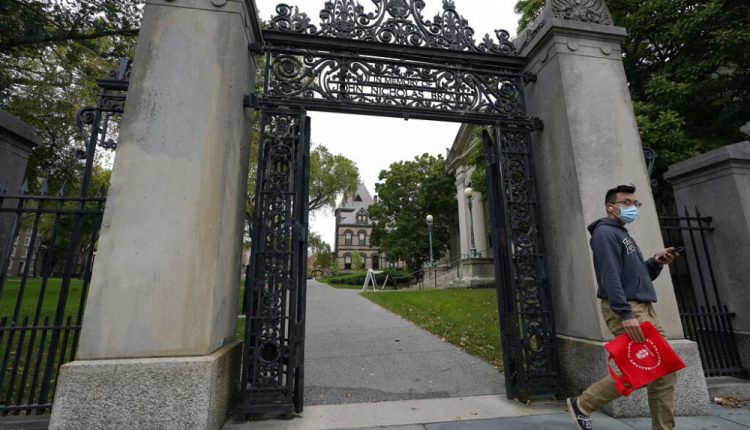 Brown University has systematically and repeatedly failed to protect women from rape and other sexual misconduct, according to a state class action lawsuit recently filed by four current and former students.

One of the women said she was advised against filing a formal complaint after she was raped at a party hosted by players on the men’s rugby team because it happened off campus, where officials said it was harder to hold someone accountable.

Kim Evans, one of the lawyers representing the women, said Monday that the women’s experience of dealing with university administrations was particularly shocking as it sparked global reckoning of sexual misconduct years after the #MeToo movement.

“It’s hard enough for an abuse survivor to tell his truth, even in the best of circumstances. But here we have Brown survivors who encounter apathy and indifference, which makes a really difficult situation even more traumatic, ”she said.

Cass Cliatt, the university’s senior vice president of communications, said Monday that the university is aware of the lawsuit but has not been officially served.

She said in an email that Brown had taken a “strategic and sustainable approach” to addressing sexual misconduct on campus, including recommendations from the university’s 2015 Sexual Assault Task Force.

“Brown has made it an institutional priority to create an environment in which incidents of sexual violence will not be tolerated.

In a joint statement, the four women named in the lawsuit dismissed the school’s recent efforts as “reluctant, minor changes to policies and procedures” that have not alleviated “the rampant public health crisis of sexual violence” on campus.

“Brown’s so-called judicial and support systems, and the faculty, staff, and administration that implement them, actively perpetuate and exacerbate the injustices and harm they claim to be trying to fix,” said the women. “Brown survivors are silenced, injured, fired and discouraged from seeking justice from the university.”

They say in their lawsuit that Brown’s poor response to allegations of sexual misconduct violates numerous provisions of Title IX, the federal law that prohibits gender discrimination, resulting in negligence, breach of contract and “willful infliction of emotional stress.”

They also say that the university’s Title IX office is pathetically undersized and that its training on sexual misconduct policies and procedures does not meet federal standards.

The women named in the lawsuit are Chloe Burns, a 2019 graduate; Taja Hirata-Epstein, graduate 2020; Katiana Soenen, an aspiring second grader; and Carter Woodruff, who enrolled in 2016 but has gone on sick leave and is seeking reinstatement. The Associated Press generally does not identify suspected sexual misconduct victims unless they choose to speak out publicly.

If upheld by a judge, their class action lawsuit would cover all women who attended Brown as of 2018 who were survivors of sexual violence that women’s lawyers suspect could run into the thousands.

Evans said the women want a court order compelling the university to comply with federal Title IX requirements as well as any harm permitted by law.

“Her main focus here is making changes and reforms to protect current and future students,” she said.

The lawsuit follows protests this spring led by a group of students criticizing the university’s handling of sexual assault allegations, said Elizabeth Bailey, another lawyer representing the women.

But the university’s problems date back to 1985, she said, when survivors launched a campaign to have the names of their perpetrators written on the library’s bathroom walls, she said.

“Our customers are taking this necessary step in the belief that, given its decades of inactivity, Brown will simply continue as it did in its 18th century.

Other prominent colleges have recently resolved lawsuits of widespread sexual assault on campus.

In March, the University of Southern California agreed to a $ 852 million settlement with more than 700 women accusing the college’s longtime campus gynecologist of sexual abuse.

In 2019, Dartmouth College settled a federal lawsuit involving nine women who sued the New Hampshire Ivy League institution on charges that they ignored years of harassment and attacks by former psychology professors.

Meanwhile, Brown, which was founded in 1764 and has more than 10,000 students, settled a federal lawsuit in September contesting its decision to reduce several women’s college sports teams, including fencing, golf, and skiing, to club status. That settlement included approximately $ 14 million in compensation for current and former students.