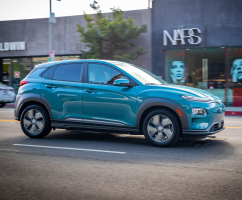 According to the Hyundai class action lawsuit, the automaker should reimburse the owners and tenants of Kona Electric and 2020 Ioniq Electric in California based on California’s Lemon Act.

The Hyundai class action lawsuit alleges that Kona EV and Ioniq EV customers complained about the battery systems only to learn that repairs were not available.

Until Hyundai replaced the batteries, Kona Electric and Ioniq Electric vehicle owners were offered software updates to “lower the battery charge limit to 80% to reduce the risk of fire”.

Owners and renters have been warned to park outside and stay away from things that could burn, but the plaintiff says none of this did anything to fix the faulty battery.

The lawsuit claims Hyundai knew about the battery problem and how serious it was before the first 2019-2020 Hyundai Kona Electric vehicle recall was issued in October 2020. Hyundai said at the time it was investigating at least 13 battery fires but had not confirmed the cause of the problem.

Hyundai said the electric vehicles were being recalled because they were equipped with battery cells made at the LG Energy Solutions China (Nanjing) plant.

Hyundai said the negative anode tab in the battery cell could be folded, which could allow the lithium coating on the anode tab to contact the cathode and create an electrical short. The battery can catch fire while charging the vehicle, parking it, or driving on the road.

Hyundai announced in March 2021 that the cause was traced back to short circuits in the battery cells, which caused at least 15 fires in Kona electric vehicles. However, Hyundai said in March no fires had been reported in the United States

Hyundai says it is still ready to replace the battery system assemblies, but a dealer should be notified if a Kona EV or Ioniq EV customer sees a warning light.

The automaker says replacement batteries will be built with an insulating coating on the cathodes in the battery cells to prevent electrical shorts and fires.

According to previous Hyundai statements, the recall could cost about $ 900 million to replace Kona Electric and Ioniq Electric’s batteries, with about 70% of the cost being borne by LG.

The Hyundai class action lawsuit has been filed in the Superior Court of the State of California, County of Los Angeles: Siamak Kermani, v. Hyundai Motor America, et al.

The plaintiff is represented by the O’Connor Law Group, Wirtz Law APC and Reallaw APC.