Foreign bidders in public mergers and acquisitions in 2020

Chapter 4 of Gilbert + Tobin’s 2021 Takeovers + Schemes Review (below) explores the involvement of foreign bidders in public mergers and acquisitions in 2020.

Many nations are placing an increasing emphasis on national sovereignty and seek to protect their country’s assets, people and general well-being from a range of threats including geo-political, military, food security, data security and security of energy supplies and key infrastructure. All of these matters heightened a general trend of increased regulation of foreign investment.

However, the general trend collided with the COVID-19 pandemic in 2020 and its threat to life, social well-being, economic security, businesses and supply chains.

The collision intensified the increased regulation of foreign investment, in particular, in Australia. This had a seismic impact on the number of foreign acquisition proposals and their success rates.

Review times were already slowing at the start of 2020, as a result of the government’s distraction by severe bushfires and its simultaneous increased focus on national security issues.

Then the COVID-19 pandemic hit.

Due to concerns that foreign investors may engage in predatory behaviour in the wake of significant economic uncertainty, the Treasurer announced that, as of 10:30pm on 29 March 2020, all monetary thresholds for all kinds of regulated actions under the Foreign Acquisitions and Takeovers Act 1975 (FATA) would be immediately reduced to zero. This resulted in significant delays as the system became clogged with low value applications. The Treasurer also extended the statutory period for the review of applications and the making of a decision from 30 days to up to six months. While few transactions would take the full six months to review, nevertheless, the review process generally became much slower.

Notably, a number of transactions with Chinese acquirers did not obtain Foreign Investment Review Board (FIRB) approval. This included relatively small foreign investments in mining companies such as a proposed $20 million investment by Chinese state owned Baogang Group in Northern Minerals and a $14 million minority investment by Yibin Tianyi Lithium in AVZ Minerals (the main asset of which was not even in Australia but in the Democratic Republic of Congo). The latter deal was restructured to avoid the need for FIRB approval (ie smaller and the acquirer did not gain a board seat).

However, in perhaps a larger surprise, China Mengniu Dairy (a Hong Kong listed company which has Chinese government owned COFCO as a 16% shareholder) was reportedly advised that it was unlikely to gain FIRB approval for its proposed $600 million acquisition of Lion Dairy and Drinks. Following this advice, the parties abandoned the sale and Lion subsequently sold the business to Bega, an ASX listed company, in an auction sale reportedly comprising Australian and Canadian bidders only.

In response to the greater demands on the system, FIRB and its supporting bureaucracy significantly revamped their processes, drafted in extra resources and introduced new streamlined exemption certificates. To FIRB’s credit, by the last quarter of the 2020 calendar year, review times for most applications had come down to more normal levels, and the government was responsive in particular on international deals that had hard 31 December closing deadlines.

Notwithstanding this, parties in many global deals took advantage of “warehousing” transactions (where Australian subsidiaries of global targets would be temporarily sold to Australian buyers) in order to ensure their global deals could complete by year end.

The government’s increasingly expansive views on national security have been evident for some time through the foreign investment review process. If there was any doubt that national security was the key focus, the government announced midway through 2020 that FATA would receive a significant overhaul. The centrepiece of which was the introduction (effective 1 January 2021) of new regulated actions and new powers on the part of the Treasurer relating to national security risks. While the zero monetary threshold was scrapped as of 1 January 2021 and the thresholds returned to the usual levels, the changes to the law and FIRB focus mean ongoing scrutiny of foreign investment transactions will continue to be intense.

From a national security perspective, these amendments give the Treasurer the power to:

With the benefit of that guidance, the recent Probuild decision, where the government effectively rejected the acquisition of Probuild by China State Construction Engineering Corporation is perhaps not particularly surprising (noting the transaction will not show up as a rejection in official statistics, as the acquirer withdrew the application before a rejection could be issued). The real question for 2021 will be the extent to which any companies are able to successfully navigate the national security review in these sectors. It is to be expected that some kinds of acquirers are likely to be seen as posing more security risk than others.

Compounding these changes has been the simultaneous introduction into Parliament of new legislation to amend the Security of Critical Infrastructure Act 2018 (SOCI Act). The Government says the objective of the proposed law is “to amend and build on the existing regulatory regime created by the SOCI Act, to enhance security and resilience of critical infrastructure assets and systems of national significance. Expansion of the concepts to include systems of national significance is intended to widen the regime to address threats such as natural disasters and cyber-attacks.” That bill has been referred to the parliamentary Joint Committee on Intelligence and Security. It is likely that during 2021, the scope of the SOCI Act will be greatly expanded beyond its current focus (certain ports, water, gas and electricity assets), which will in turn feed back into the definition of “national security business”, and therefore the transactions that remain subject to review regardless of value, under FATA.

In light of the intense focus on foreign investment regulation in 2020, it should come as no surprise that foreign bidder activity in Australian public M&A in 2020 was at a low point for this decade at 45% of all announced deals over $50 million (19 of 42 deals).

Indeed, if not for a resurgence of foreign bids in the last quarter, the percentage would have been below 40%.

This fall is undoubtedly due to a combination of the COVID-19 pandemic making cross-border M&A more challenging, with the barriers to travel making negotiations, due diligence and site visits all harder as well as the increased regulation of foreign investment (including in Australia, the imposition of zero dollar monetary thresholds).

The value of foreign investment was $21.9 billion in 2020, accounting for approximately 67% of the total value of public company M&A over $50 million. 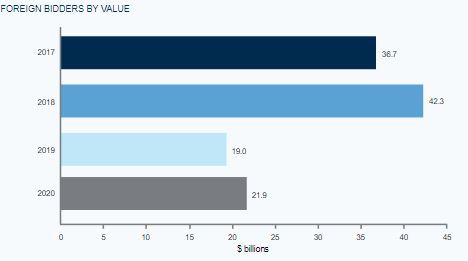 One might argue, however, that the value of foreign investment in 2020 was largely propped up by Coca-Cola European Partners’ proposed $9.8 billion acquisition of Coca-Cola Amatil.

Whatever the case, this continues the trend from 2019 of foreign bidders being significant players in the highest value public M&A transactions in 2020. Indeed, four of the five transactions exceeding $1 billion involved a foreign bidder: 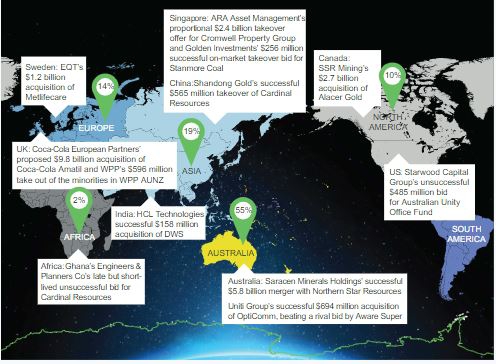 Where did the bidders come from?

As illustrated in the world map (below), in 2020 foreign bidders came from a range of continents and countries including Asia (Singapore, China, India and the Philippines), North America (US and Canada), Europe (including the UK, Sweden, France and Spain) and even Africa (Ghana, albeit that bid was short lived)!

However, when you break it down some more, there are some interesting themes in this:

The largest number of foreign bidders from individual countries were:

The geo-political tensions with China and the continued (Australian government and media) sensitivity towards Chinese foreign investment, definitely resulted in a decrease in Chinese acquisitions. That said, it was interesting to see other Asian acquirers from Singapore and India fill the void, albeit the large interest from Japanese bidders in 2019 did not materialise in 2020.

European bidders surprised on the upside in 2020 as well. Interestingly, and especially given the large amount of private equity activity, there were few successful public company acquisitions by North American bidders. We would suggest this may prove to be an anomaly over time.

For sectors which were of interest to foreign bidders see Chapter 2 – Sector analysis for public mergers and acquisitions in 2020.

Foreign bidder success rates in public M&A transactions reached a high in 2019 at 87% of all announced public deals over $50 million. However, the reverse was true in 2020. Only 47% of foreign acquisitions were successful in 2020, the lowest over the last 10 years.

We put this down to a combination of some contested bidding situations in which foreign bidders were unsuccessful (eg UAC Energy missed out on Infigen to Iberdrola and three unsuccessful bidders for Cardinal Resources), the general lower success rate of all deals (see Chapter 6 – Success factors in public mergers and acquisitions in 2020) and the tougher foreign investment regulation environment. That said, no listed company M&A deal failed for want of getting FIRB approval (at least not any ones that were announced).

It should also be noted that this Review does not record confidential non-binding indicative offers which may not become public if rejected. If one takes this into account, the true success rates may be even lower which shows that 2020 was indeed a tough year for deal making. 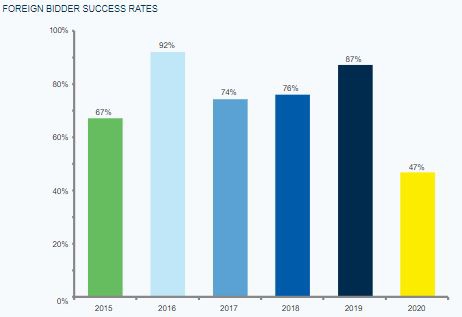