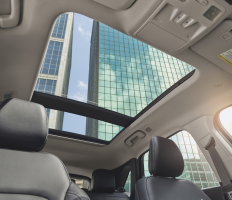 
The ninth district is sending a sunroof class action lawsuit to the lower court after Ford owners alleged the glass was broken.

May 31, 2021 – A Ford class action lawsuit against Sunroof is back on track after the 9th District Court of Appeals overturned a lower district court’s dismissal ruling.

According to the sunroof lawsuit, the panoramic glass can suddenly explode and cause broken glass to rain on Ford occupants.

The Ford Sunroof class action lawsuit claims plaintiff Jessica Beaty was driving her 2013 Ford Escape in 2017 when the sunroof broke for no apparent reason.

The plaintiff says the sunroof glass fell on her and her young daughter, and Ford allegedly knew this could happen.

The panoramic sunroofs appeared on Ford vehicles in 2007, but Ford reportedly soon received complaints that the sunroofs exploded.

In addition, the plaintiffs do not cite an “unusually high” number of relevant pre-sale complaints that might have alerted Ford to a sunroof defect.

The District Court judge dismissed the Ford Sunroof class action lawsuit, stating that it was “against common sense to claim that a manufacturer must disclose every single defect in a component or part to any potential buyer, even if the defect is minor and safe, or even if it has only happened a few times. “

The judge also said it was not sensible for Ford to warn customers about components that may or may not have problems one day.

In dismissing the entire sunroof class action lawsuit, the judge agreed with Ford that the warranty had already expired when the plaintiff’s sunroof broke.

As a sign of how conflicting courts can rely on the same laws and arguments, the Ninth District sent the case back to the District Court, which dismissed the lawsuit.

The appeals court found that pre-sale customer complaints at both Ford and the National Highway Traffic Safety Administration (NHTSA) raise a pertinent question as to whether Ford knew its sunroofs were exploding spontaneously.

The Ninth District also ruled that sunroof complaints filed directly with Ford “are an indication that the defendant is aware of the defect”.

Ford argues that even if sunroof complaints are sufficient for a jury to conclude that Ford was aware of sunroof problems, plaintiffs’ claims fail because the complaints do not apply to their specific Ford model and year.

But the appeals court disagrees.

“[W]when a plaintiff tries to produce evidence of other accidents ”to prove“ notifying the defendant ” [a] Malfunction”, “[a] Proof of a substantial similarity is required. “

The appeals court says they need to “look at the evidence in the light most favorable to the Beatys,” meaning that a “sane juror could determine that Ford knew the PSR.” [panoramic sunroof] There would be bugs in the essentially similar PSRs installed in the 2013 Ford Escape. “

“If [Ford’s expert] said one thing and [the Beatys’ expert] said another on the same subject that it is the jury’s job to determine the facts, not a court that makes a summary judgment. “

According to the Panorama Class Action Lawsuit Panorama Sunroof, these Ford models are equipped with defective sunroofs.

The Ford Sunroof class action lawsuit has been filed in the US District Court for the Western District of Washington: Beaty et. al, v. Ford Motor Company.

CDPR Will Start High-Budget Projects In 2022, And Look Into Mergers And Acquisitions