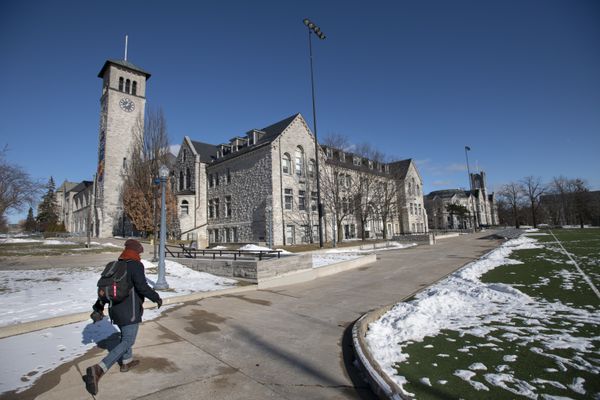 A pedestrian walking along the path near Kingston Hall on the campus of Queen’s University in Kingston, Ont., in January, 2021. A 2019 review of the experiences of low-income investors with group RESP providers by researchers at Queen’s University and the University of Winnipeg reported inaccurate marketing materials and high-pressure sales tactics by sales representatives.Fred Lum/The Globe and Mail

Liza Lonergan remembers the CST Savings saleswoman who sat in her living room four years ago and convinced her to buy into a group registered education savings plan to save for her newborn daughter’s postsecondary education. The two women traded stories about new motherhood while Ms. Lonergan nursed her daughter. “It was very personalized and emotional,” she said.

Ms. Lonergan, a 39-year-old freelance project manager in Toronto, first contacted the group RESP provider after a friend recommended it. And that day in her living room, the pitch appealed: The plan’s fees were lower than other financial institutions, the saleswoman told her, and its investment mix was safe for building her child’s education savings.

Group RESP providers require parents to commit to a certain number of shares, called units, upfront. Ms. Lonergan bought 25 and began contributing $208 a month. When her twins were born this year, she called CST again and opened plans for them, too. But when she and her husband became concerned about the returns and asked about transferring their children’s RESPs to another financial institution, they found out there was a major barrier to exiting.

By then, the couple had contributed a combined total of $10,800 to their children’s RESPs. Roughly $5,800 of it has gone toward the sales charges – the cost of opening the accounts – which are front-loaded, meaning parents must pay the majority of it off before they begin to actually contribute toward their children’s education. It’s also the amount they would lose if they transferred their plans elsewhere.

“I see that now [the saleswoman] made oblique references, like, ‘This plan really works if you stay in it for 18 years.’ It wasn’t like she was saying, ‘The first $4,500 you contribute is not yours,’” said Ms. Lonergan. While she said the saleswoman disclosed a $200-a-unit sales charge, she didn’t think to question what it meant. “I think if someone had said it to me that way, I wouldn’t have signed.”

Group RESPs, also known as group scholarship plans, have long had a bad reputation in the personal finance world. As opposed to individual or family RESPs, which parents can easily open at their bank or other financial institution free, group RESPs are sold by private companies. The five major providers of group plans that are either active or closed to new members, which have a combined $15.7-billion in assets under management, were named in a Quebec class-action lawsuit certified in 2021 that alleged their per-unit upfront sales charge violates a provincial securities regulation and the Quebec civil code.

The companies that sell them say the pooled structure allows parents to benefit from a more conservative asset mix that protects their principal contributions, and participants can receive loyalty bonuses for remaining in the plan until their children go to postsecondary school. Parents also share the investment returns of other plan participants who terminate their plans early, or whose children don’t collect all of their education payments.

But group RESPs have come under fire for their sales charges, high fees, restrictive contract terms that can disqualify parents even after they’ve contributed hundreds or thousands of dollars, and dense prospectus documents that are difficult for the average investor to comprehend.

“People don’t understand what they’re getting into,” said Jason Pereira, partner and financial planner at Woodgate Financial in Toronto. While he said he has no doubt many parents have had good experiences with group RESPs, “I’ve rarely had a client, once I explain how they work, who has not felt cheated.”

The Quebec lawsuit is the latest in a string of negative headlines for group RESPs. A 2019 review of the experiences of low-income investors with group RESP providers by researchers at Queen’s University and the University of Winnipeg reported inaccurate marketing materials and high-pressure sales tactics by sales representatives.

In 2015, the Ontario Securities Commission laid criminal and quasi-criminal charges against three former sales representatives from Group RESP Corp., Knowledge First Financial and CST Consultants Inc., and multiple employees of two Toronto-area hospitals in connection with allegations that maternity ward records were sold and used to market the RESPs to new mothers. All three financial firms said at the time they had fired the employees involved and co-operated with the OSC’s investigation. Each of the sales representatives later pleaded guilty.

RESPs, created in 1998, are tax-sheltered investment accounts for parents to save for their children’s postsecondary education. Parents can contribute a lifetime maximum of $50,000 a child and benefit from a federal government program, the Canada Education Savings Grant, which provides a 20-per-cent annual match on parents’ contributions up to a yearly maximum of $500.

Unlike traditional RESPs, where parents can contribute on their own schedule, group RESP providers require parents to commit to a certain number of units upfront and make contributions to the plan on a fixed schedule. Participants still receive the government’s matching grants through group plans.

Leslie Gottlieb, senior financial adviser and founder of Bright Start Financial, said she regularly sees clients who’ve been part of group RESP plans, and their lack of understanding of the long-term nature and set schedule of these plans is a common thread. “In reality, clients’ circumstances can change over time,” she said. “It’s a big commitment to make.”

The number of units parents buy determines the total cost of their sales charge, which is paid upfront. All of a parent’s contributions go toward the sales charge until half has been paid off, and then a portion of their contributions until it’s fully paid.

CST charges $200 a unit, which its plan prospectus says can range between 3.1 per cent and 24.1 per cent of a unit’s cost depending on which contribution option parents choose. Knowledge First Financial, another RESP dealer that since 2012 has gradually transitioned away from group plans to offering individual RESPs, has a slightly different structure. Its upfront sales charge ranges from 1.5 per cent to 9.5 per cent of parents’ total contribution goal, depending on the age of their child when they enrol.

Aravind Sithamparapillai, an investment adviser and associate with Ironwood Wealth Management Group in Fonthill, Ont., said parents who stay invested for the long term will come away with education savings for their child. But the structure of the sales charge makes it economically unreasonable for them to get out of the plans if they’re in the early years of contributing. “If you stop you [may] have no money that’s technically yours in the group RESP at that point.”

CST chief operating officer Peter Lewis said in an e-mail to The Globe and Mail that over time it works out in parents’ favour, as the sales charge is coupled with a lower asset management fee. He said CST has compared the fees for an RESP holding units of the CST plan against one holding mutual funds, and found “the CST fees … are equivalent to mutual funds with a 1- to 1.5-per-cent [management expense ratio or MER].”

Clients who’ve made all their contributions and whose children collect all four education assistance payments when they go off to school are refunded half the sales charge, he added.

Paul Renaud, Knowledge First Financial’s interim president and chief executive, said in an e-mail that the company has “robust affordability and suitability requirements and practices,” and its fees were in line with the industry. On average, looking at total fees incurred, “our clients can expect to pay the equivalent of roughly a 2-per-cent annual management expense ratio over the lifetime of their investment, which is very common for long-lasting managed products of this nature .”

But Mr. Pereira pointed out parents can save for their children’s education much more cheaply by opening an RESP with a bank or a robo-adviser and investing in exchange-traded funds, which unlike mutual funds have no trailers built into their fees and tend to have much lower MERs. “There’s quite literally no reason to deal with a group [RESP] provider,” he said.

The hefty cost of these plans is at the heart of the Quebec class-action lawsuit against CST, Knowledge First Financial and its subsidiary Heritage Educational Foundation, and three other scholarship plan providers. The lawsuit alleges the plan providers’ per-unit sales charge violates a 2005 Quebec regulation that caps group scholarship plan enrollment fees at $200 a plan, and is considered an “abusive clause” under the Quebec civil code.

The lawsuit claims the lead plaintiff, Qing Wang, purchased a total of 58.6 units from CST over two RESPs for his two children, and paid a total of $11,720 in enrollment fees – roughly 60 per cent of the total amount he contributed over two years.

Knowledge First Financial, which acquired Heritage in 2018, said that in addition to its own gradual shift away from group plans, it had transferred existing Heritage customers to individual RESPs in 2022.

These documents were designed to “give investors key information about the benefits and risks of a scholarship plan in a plain language format,” said Ilana Kelemen, senior adviser of communications and stakeholder relations at the CSA, in an e-mail to The Globe.

In a 2010 notice and request for comments preceding the changes, the CSA said many investors “had trouble understanding the unique features and complexity of scholarship plans.” Clearer and simpler prospectus disclosure was necessary, the CSA said, particularly as the number of investors in scholarship plans, including those with low or modest incomes, had grown “substantially” since 1998.

The CSA also set out additional requirements for group scholarship providers, including revising plans’ eligibility rules to match the RESP eligibility rules under the federal Income Tax Act and requiring the Ombudsman for Banking Services and Investments to deal with any investor complaints.

The CSA is not considering any new rules for scholarship plans. But Ms. Kelemen pointed to its client-focused reforms, which were phased in from 2019 to December, 2021, and require all registered investment firms, including scholarship plan providers, to provide additional cost-related disclosures prior to an investor opening an account.

Mr. Pereira said improved disclosure is important but doesn’t address the complexity of the plans. “These are complicated, they are not standard investment accounts,” he said. “People say disclosure’s all that matters, [but] product design matters. The simpler you make something for other people to understand, the less likely there’s going to be a misunderstanding now or in the future. This flies in the face of that.”

Are you a young Canadian with money on your mind? To set yourself up for success and steer clear of costly mistakes, listen to our award-winning Stress Test podcast.