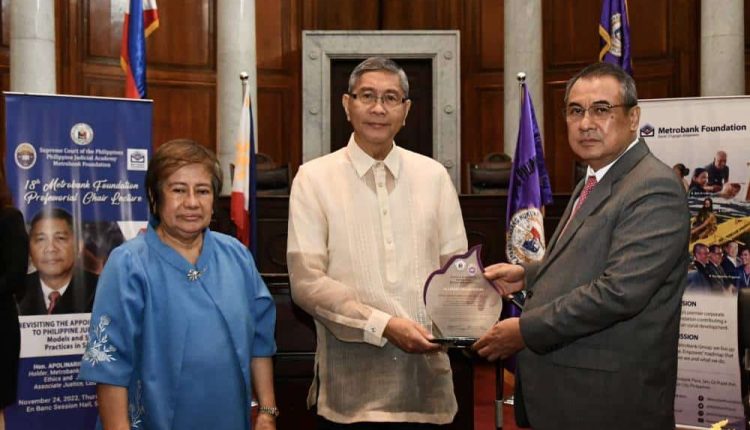 Court of Appeals (CA) Associate Justice Apolinario D. Bruselas Jr. has been conferred the “2022 Metrobank Professorial Chair in Ethics and Judicial Conduct” during the 18th Metrobank Foundation Professorial Chair Lecture held at the session hall of the Supreme Court (SC) on Nov 24

The PIO said that among the key points presented by Justice Bruselas is that “the emerging situation amongst a number of states reflects a discernible departure from executive and legislative dominance” and that the development in judicial appointments seems to be towards a diminished participation in the judicial appointments posited by these two branches of government.

“An appointment process that is based on objective criteria efficient, transparent, and free from executive and legislative dominance leads to a co-equally independent judiciary and, ultimately, to a strong Rule of Law,” the PIO said quoting from Bruselas’ lecture.

The PIO said that the Metrobank Professorial Chair in the areas of law – a joint project of PhilJA and Metrobank Foundation, Inc. – has, for the past 20 years, promoted excellence in the Judiciary through the delivery of timely and comprehensive discourses prepared by distinguished Members of the Judiciary and the Academy.