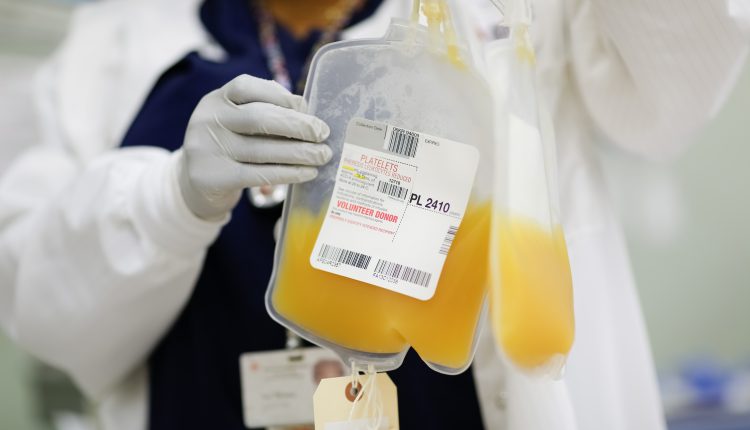 That’s mainly because the collection and distribution system is safe and efficient. But there’s a new behind-the-scenes challenge, according to some hospital officials, who fear a change in how blood platelets are handled will sharply increase the cost — and, in some cases, the number of transfusions needed — to treat cancer patients, trauma victims, and those undergoing surgery.

The concern revolves around the American Red Cross, the nation’s single-largest provider of blood products, which will exclusively use an expensive technology to reduce the risk of dangerous bacteria tainting platelets. But the move limits hospitals’ choice of less expensive testing options, which are also effective. “We are very concerned the blood collection centers have decided what is best for our patients when we are on the front line,” said Dr. Aaron Tobian, director of the transfusion medicine division at Johns Hopkins Hospital.

His concerns are echoed by some in Congress, including Rep. Earl “Buddy” Carter (R-Ga.), who in February joined 12 other congressional Republicans in signing a letter to the Department of Health and Human Services asking whether something could be done to boost hospital choices for complying with blood safety guidelines.

“This has impacted rural hospitals in particular,” which have tight budgets, he told KHN.

The switch by the Red Cross, which it expects to be fully implemented by next year, stems from a recommendation by the FDA in late 2020 to use any of three methods to reduce the risk of bacterial contamination in the blood platelets.

Under those recommendations, hospitals can buy platelets specially processed to reduce pathogens, which is the method the Red Cross and some other, smaller suppliers are moving toward. Or blood centers can test samples of each unit of platelets, looking for bacterial contamination, at least 36 hours after the blood is collected. The other option is to use a rapid test for bacteria shortly before the platelets are transfused, which occurs in addition to a primary screening for bacteria after collection.

The FDA did not rank the options. And many hospitals and blood centers already employ one or more of them. No test or process is 100% effective.

“Each of those methods has pluses and minuses,” said Dr. Claudia Cohn, chief medical officer for the nonprofit Association for the Advancement of Blood and Biotherapies, which represents health care providers involved with transfusion medicine. She is also a professor of laboratory medicine and pathology at the University of Minnesota.

The FDA offered the guidance because platelet transfusions are associated with a higher risk of sepsis and fatality than any other blood component, with some research estimating the chance of a serious infection at 1 in 10,000. Platelet transfusions are important to prevent or treat bleeding in some patients, such as those who have certain types of cancer, are trauma accident victims, or are undergoing surgical procedures that can result in a large loss of blood.

The Red Cross, which collects about 1 million units of platelets annually, chose the processing method that reduces pathogens, the most expensive option, adding about $150 more per unit to hospitals’ costs for platelets. It precludes the use of the lowest-cost alternative, a $25 rapid test made by Verax Biomedical, because that test is not approved by the FDA for use on those processed platelets. The other testing method adds about $83 per unit.

The Red Cross, which collects and distributes about 40% of the nation’s overall blood supply, signed a five-year deal in April with California-based Cerus Corp., which provides the synthetic compound and ultraviolet illuminator used to process the platelets. Approved in 2014, it remains the only such system sold in the U.S.

Platelets are already one of the most expensive blood products with an average per-unit price of $500.

Pathogen reduction could translate into six-digit additional costs to small hospitals’ annual expenses, and “$1.5 million to $3 million” to what large academic medical centers spend each year on platelets, said Tobian, based on a research paper he co-authored.

Some of that might be passed along to patients — if they pay a percentage of their treatment costs, for instance, or in higher insurance premiums.

But hospitals may also have to eat some of the additional expense.

The financial effect on the Red Cross and other blood suppliers is unclear. Organizations that supply blood are seeing declining donations, and operate on thin margins, although platelets tend to be one of their most profitable products. Pathogen reduction allows the Red Cross to charge more for platelets, but it must also buy the processing system from Cerus.

In its most recent IRS filings, covering the financial year that ended June 30, 2021, the Red Cross said its “biomedical services” brought in $1.89 billion in revenue, but cost $1.83 billion, a $49 million difference.

Red Cross spokesperson Jenelle Eli said in an email that is “not a revenue number” but would not give more specifics. In some years, Red Cross’ costs exceed revenue, she wrote, and in others, the opposite is true.

She also would not provide details on the cost of purchasing the system from Cerus, whose chief medical officer joined the company after holding a similar position at the Red Cross.

Pathogen-reduced platelets, while requiring a higher upfront cost, are a better value for hospitals because they reduce bacterial risk “while also mitigating other pathogen threats, like parasites, viruses and even pathogens we may not know about yet,” wrote Jessa Merrill, American Red Cross Biomedical Services communications director, in a separate email. It’s a “ready-to-use product that doesn’t require any testing or further manipulation.”

Hospitals say the other testing methods outlined by the FDA have advantages, also, including a longer shelf life for platelets. Platelets that are tested for bacteria can be used for up to seven days, as compared with the five-day life of the processed platelets.

“We have to be very efficient,” said Kazem Shirazi, a technical specialist in transfusion services at George Washington Hospital in Washington D.C., who spends part of his days juggling requests from surgeons for a supply in the operating rooms with the need to have a supply on hand in the emergency room.

The reduced time frame for the platelets his hospital buys from the Red Cross means “we end up wasting more,” Shirazi said.

Patients probably won’t know what method is used on the platelets they receive, although research indicates the more expensive option can sometimes increase the amount of product needed.

The process is useful to kill pathogens, but also “makes for a platelet that doesn’t do its job as well,” said Cohn.

A meta-analysis of 12 studies of cancer patients who received pathogen-reduced platelets found no increased risk of death or bleeding. However, it did show an increase in the “number of transfusions required.”

And that’s an issue. Tobian at Johns Hopkins said physicians like to keep the number of transfusions to a minimum: “The safest transfusion is the one that can be avoided.”

Safety was another concern raised by Rep. Carter during an April 27 House Energy and Commerce Committee hearing. He mentioned three cases of platelet-linked sepsis since 2019. Those platelets had been processed with the pathogen-reduction method, the FDA said in a December memorandum.

But Red Cross spokesperson Merrill dismissed Carter’s example, saying that those cases “were not due to a failure of the pathogen reduction/inactivation, but instead due to a post-manufacturing issue.”

Some platelet contamination cases — in both processed or tested platelets — might involve tiny leaks or other damage in storage containers, suggested a paper published last year in the journal Transfusion. Two Cerus employees were among the authors.

The view of the processing method may depend on the size of the hospital. Smaller hospitals, which don’t have trauma centers or large cancer programs, use far fewer platelets each year than large academic centers, which might need 10,000 or more units annually. “Smaller centers love the pathogen-reduced platelets because they don’t have to mess with it and it’s easy and safe to use,” said Cohn.

But academic hospitals, which do a lot of transfusions, “are really frustrated,” she said. “If their blood suppliers are only willing to offer one kind, they are constrained.”

KHN’s ‘What the Health?’: A World Without ‘Roe’